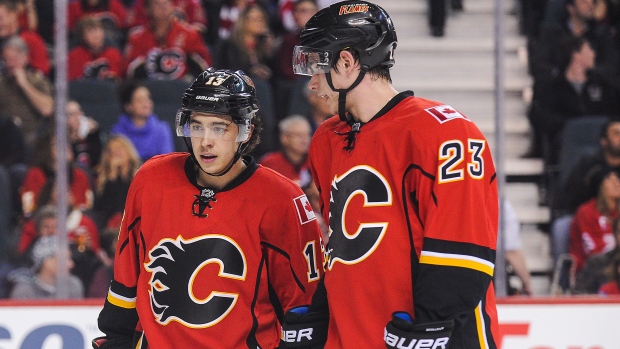 The Calgary Flames were primed to be a team of regression in 2015-2016, defying statistical odds to not only reach the playoffs last season, but win their first-round series against Vancouver.

Because of terrible possession stats, without significant changes the Flames were the team most likely to see their performance decline. But, after some major moves, it's possible that regression can't simply be assumed.

While the Flames have upgraded their forward and defence units, the same can't be said of goaltending, where they have Jonas Hiller and Karri Ramo, the same tandem that was primarily responsible for Calgary's middling .911 save percentage last season.

Percentages remain a challenge. The Flames scored on 10.5 per cent of their shots last season, second only to Tampa Bay. In the previous three seasons, they scored on 9.2 per cent of their shots and while that difference might not seem like a lot, when applied to 2,251 shots on goal over a full season, that results in a 31-goal difference (for a team that scored 24 more goals than they allowed in 2014-2015).

So, for the Flames to remain a playoff team, they will either need to improve their possession numbers, or continue to get an edge with high percentages.

1. Who wins the lottery and gets to be Dougie Hamilton's defence partner on the first pairing?

2. Does Sam Bennett ultimately play centre or wing in his first NHL season?

3. Can one of Jonas Hiller or Karri Ramo emerge as the team's clear-cut No. 1 goalie - or is a platoon in the works again?

1. Jon Gillies (Providence, NCAA): NCAA Champion who projects as a big, solid No. 1 goalie in the NHL.
2. Mason McDonald (Charlottetown, QMJHL): Steady, calm and very good. With Gillies, they're the Flames' tandem for years to come.
3. Brandon Hickey (Boston University, NCAA): Strong skating, puck moving defenceman who competes hard.
4. Mark Jankowski (Providence, NCAA): Progression has been steady and consistent. His game resembles that of Riley Sheahan.
5. Rasmus Andersson (Barrie, OHL): Conditioning is improving and with excellent head and hands. Could be a solid NHLer.

Despite having several significant contributors on entry-level contracts, the Flames don't have a great deal of cap room. They aren't constricted so much right now, but it won't come as a shock if they move out a vet or two, if possible, in order to create more long-term flexibility.

Tsu Tina nation powwow! It's unbelievable the support I get from the native communities around Calgary. Thank you! pic.twitter.com/XwYI1DoIbh