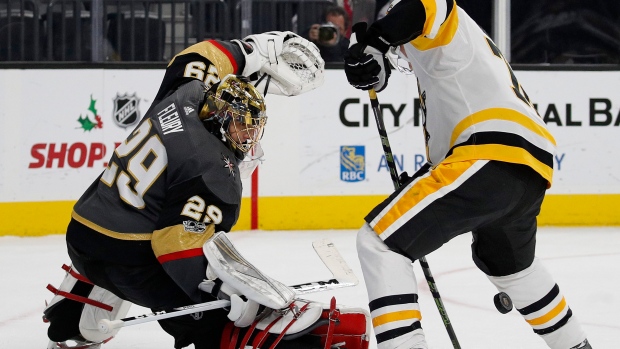 LAS VEGAS — Marc-Andre Fleury has been thinking about one game for quite a while.

And Thursday night he rose to the challenge.

Fleury stopped 24 shots against his former team and Jon Merrill's first goal of the season snapped a third-period tie as the Vegas Golden Knights beat the Pittsburgh Penguins 2-1.

It was the first meeting between the defending Stanley Cup champions and Vegas, which acquired Fleury from Pittsburgh during the NHL expansion draft on June 21.

"A little relieving a bit," Fleury said after beating the team that took him with the No. 1 pick in the 2003 draft. "Ending up with the two points, it's big. Still got another one to go (in Pittsburgh). I'm glad it's over and we got the win."

The matchup between the Penguins and Fleury was arguably the most anticipated game against a former Penguin since Jaromir Jagr played against Pittsburgh on Dec. 11, 2001, for the first time after his trade to Washington.

Fleury, who returned to the ice Tuesday in a loss to Carolina after missing 25 games, wasted no time in reminding Pittsburgh what it let get away. He bolted from the crease early in the first period, skated to the blue line, and dove head first to poke the puck away from the streaking Penguins.

The 13-year veteran goaltender looked sharp throughout the night, with several more spectacular saves, including a lunging stop with his chest that thwarted Brian Dumoulin's wrist shot late in the second period.

"I thought the goaltending at both ends of the rink was really good," Pittsburgh coach Mike Sullivan said. "It seems like those are the types of games that we're in night in and night out and we haven't found ways to win those. And that's what we have to do."

After missing six straight games due to a lower-body injury, the Penguins activated goalie Matt Murray off injured reserve in time to face his mentor, Fleury.

Murray, who stopped 24 shots, had his personal regulation losing streak extend to four games, the longest of his career.

"They just work so hard and that's where they caught us by surprise, especially on the forecheck," Murray said. "They're definitely a hard-working team and fast team, good in transition. I don't think they do anything special, but they just work extremely hard and I think that's why they're having success."

Meanwhile, two-time Hart Memorial recipient Sidney Crosby acknowledged it was strange taking shots at his close friend Fleury, after the two played together for 12 seasons.

"You see him there, it's a little different but once get into play, you're playing," Crosby said. "It's the first time playing against each other and that's to be expected. Both goalies were good, it was just one of those games and they found a way to get that last one in the third."

Vegas wasted no time in giving Fleury an early lead, when Neal's rebound off Colin Miller's wrist shot found its way past Murray less than two minutes into the game.

The Penguins tied it later in the period when Carl Hagelin found Cole, who beat Fleury top shelf from just behind the goal line for his second goal of the season.

Merrill's one-timer put the Knights ahead with 11 minutes left in the game, slapping Erik Haula's pass between Murray's glove and left pad.

"I kept telling myself I've got to score, I've got to do something," said Merrill, who was playing in just his sixth game this season. "I made a presence for myself and I'm really happy I was able to do that tonight."

Merrill's goal before a crowd of 18,029 helped the Golden Knights improve to 12-2-1 at home, while moving them one point behind Los Angeles in the Pacific Division, 43-42.

"He's been a real soldier for us, and to get that goal, everyone was real happy for him," Vegas coach Gerard Gallant said. "I think from the drop of the puck to the end of the game, it was a fairly even game. We played a good hockey game. Great goaltending on both ends. It's fun, and the guys played hard. Our guys showed up for it."

The Golden Knights became the fastest team to 20 wins in NHL history. ... Vegas D Deryk Engelland's next game will be the 500th of his career. ... Engelland, Fleury, James Neal, and David Perron have all played for the Penguins during their careers. ... Crosby is five goals away from notching the 400th in his career. ... Crosby has at least one point in 10 of his last 14 games, with eight goals and 11 assists. ... Thursday was the first road game of a three-game trip for Pittsburgh, and first since Dec. 1. ... The Penguins dropped to 4-8-1 on the highway this season.