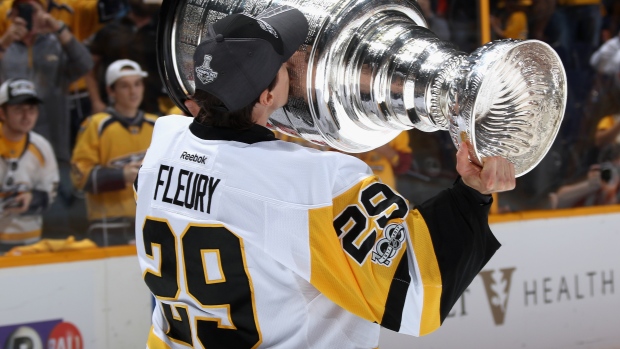 Marc-Andre Fleury waived his no-movement clause back in February, playing the postseason knowing it would almost surely be his last with the Pittsburgh Penguins.

TSN Hockey Insider Pierre LeBrun confirms the Penguins goaltender will be exposed in the expansion draft, barring a trade before Saturday’s deadline.

This is accurate, however, doesn't mean he still can't be traded elsewhere. Still lots of options on table for Fleury .... https://t.co/aUzNdjumyy

Fleury has been the subject of trade speculation since the 2016 postseason, when Matt Murray replaced him in net due to injury and backstopped the Penguins to their first of two Stanley Cup championships.

In a reverse of last year’s situation, Fleury filled in for Murray (lower-body injury) to open the postseason this year and posted a 9-6 with a .924 save percentage and a 2.56 goals against average. Murray replaced Fleury in the first period of Game 3 against the Ottawa Senators in the Eastern Conference Final and held the starting role for the remainder of the playoffs.

The Penguins will opt to protect the 23-year-old Murray over Fleury.

He is coming off his third career Stanley Cup and handed the Cup to Murray after Sunday's Game 6 victory.