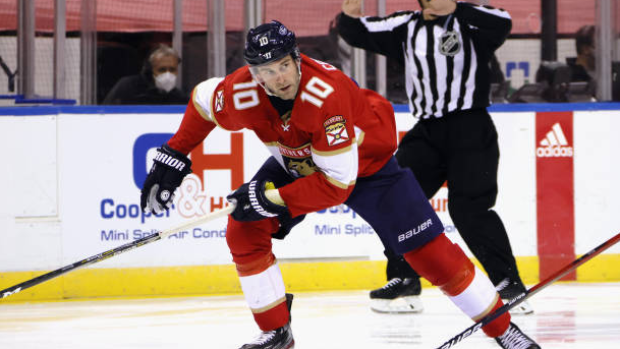 Wallmark returns to the Panthers after being traded to the team by the Carolina Hurricanes at last year's deadline. He had one goal and one assist in seven games before the season was paused. In 16 games this season with the Blackhawks, he has three assists. Carrying a cap hit of $950,000, he is scheduled for restricted free agency this summer.

We have acquired defenseman Lucas Carlsson and forward Lucas Wallmark from Chicago in exchange for Brett Connolly, Riley Stillman, the RFA rights to Henrik Borgstrom, and a 2021 seventh-round draft pick.

Connolly has two goals and four points in 21 games with the Panthers this season. The 28-year-old scored 19 goals and posted 33 points in 69 games last season and scored a career-high 22 goals and 46 points with the Washington Capitals in 2018-19.

The Campbell River, BC native carries a $3.5 million cap hit on the four-year, $14 million contract he signed with the Panthers in 2019.

Stillman, 23, is without a point in eight games with the Panthers this season. A fourth-round pick of the team in 2015, he currently carries a cap hit of $773,333 and will be a restricted free agent this off-season.

Borgstrom, 23, has spent this season with HIFK Helsinki in Finland, where he has 11 goals and 19 points in 27 games. He was selected 23rd overall by the Panthers in the 2016 NHL Draft.

"We are receiving a very exciting, young player with a bright future in Henrik Borgstrom," Blackhawks general manager Stan Bowman said. "He is a high-end talent and we think he has the ability to be a big time player for us. We also add to our forward depth with an experienced veteran in Brett Connolly and a physical defenceman in Riley Stillman.

"Connolly is a proven goal scorer and adds some versatility to our front line while Stillman is a young, physical defenceman whose aggressive style brings a different element to our defence."

According to CapFriendly, the Panthers now have $4.12 million in cap space following the deal ahead of Monday's trade deadline.