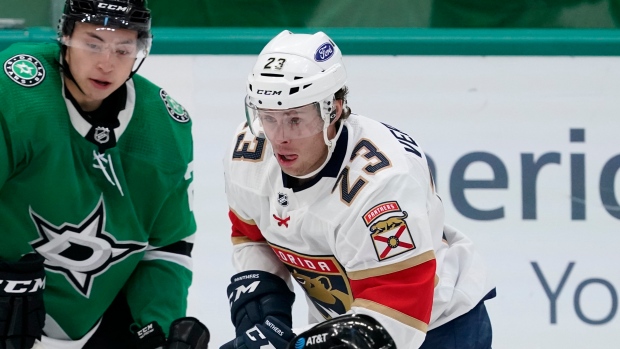 Florida Panthers forward Carter Verhaeghe is expected to be out week-to-week with an upper-body injury, the team announced Tuesday night prior to their showdown with the Dallas Stars.

#FlaPanthers forward Carter Verhaeghe is expected to be out week-to-week with an upper-body injury.https://t.co/gaZ65S4VSr

Meanwhile, forward Anthony Duclair has been activated from injured reserve. Forward Lucas Wallmark and goaltender Spencer Knight have been recalled from Florida's taxi squad. Defenceman Kevin Connauton has been loaned to taxi squad.

Forwards Sam Bennett, who was acquired Monday from the Calgary Flames, and Nikita Gusev were also added to Florida's active roster.

Following their matchup with the Stars, Florida will be back in action Thursday against the Tampa Bay Lightning.