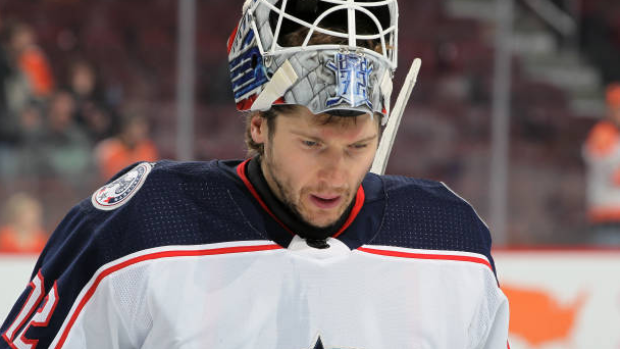 Sergei Bobrovsky told Russia's Sport 24 that discord between him and Columbus Blue Jackets began after the team's first-round loss to the Washington Capitals in 2018 and he knew soon after that he would not sign an extension with the club.

There was no chance I'd sign an extension with (Columbus)," Bobrovsky said, per a translation by Sport-Express reporter Igor Eronko. "I felt I need another scenery. And it’s not just because of tensions with the (team)."

Sergei Bobrovsky to my wife @DariaTuboltseva : ‘There was no chance I'd sign an extension with #CBJ. I felt I need another scenery. And it’s not just because of tensions with the Jackets [that started after the PO loss to the Caps]'

Bobrovsky, who informed the Blue Jackets he did not plan to sign with team last summer, signed a seven-year, $70 million contract with the Florida Panthers on July 1.

The two-time Vezina Trophy-winning goaltender is coming off a tumultuous season with the Blue Jackets, which included not starting the team's first game and a suspension for personal conduct after being pulled from a game in January. Bobrovsky, who finished the season with a 37-24-1 record and a .913 save percentage, said that despite the problems, the Blue Jackets continually attempted to sign him to an extension.

"I was suspended by the team, there were some conflicts in the team, a lot of meetings and some of them just because of me," Bobrovsky explained to Sport 24. "I didn't feel comfortable. And still the Jackets tried and tried to extend me all season long."

The 30-year-old added that he believes he played his best hockey later in the season because the pressure of playing ahead of the trade deadline had worn off. He went 18-8 from the start of February and allowed just eight goals in the team's first-round sweep of the Presidents' Trophy-winning Tampa Bay Lightning.