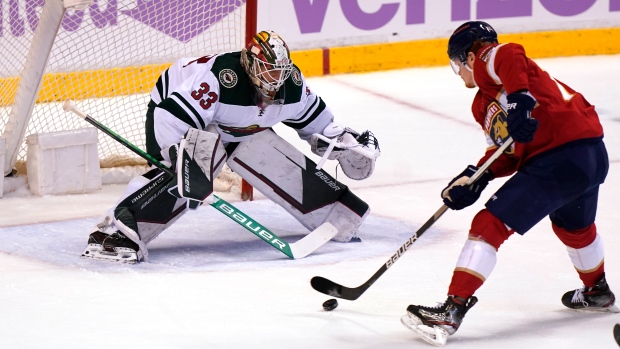 SUNRISE, Fla. (AP) — Frank Vatrano scored twice and Sergei Bobrovsky made 34 saves to help the Florida Panthers remain perfect at home with a 5-4 victory against the Minnesota Wild on Saturday night.

Owen Tippett, Carter Verhaeghe and Sam Bennett also scored for the Panthers, who improved to 13-2-3 overall and 10-0-0 at home this season. Vatrano added an assist.

“This is a tough building to play in and we’re ready to go every night,” Panthers interim coach Andrew Brunette said.

Florida has scored at least four goals in each of its home games to move within one game of the longest such streak to start a season. Philadelphia had an 11-game string to open 1992.

Minnesota pulled within 3-2 when Kaprizov scored his fifth goal on a wrist shot 1:55 into the third period. Verhaeghe scored at 5:42 to restore Florida’s two-goal lead, and it stayed that way until Foligno scored with 45.1 seconds left.

Bennett got an empty-netter for Florida nine seconds later — which became a big goal when Hartman scored with 8.6 seconds remaining.

Minnesota rookie Brandon Duhaime had never played at Florida before — at least, not as a member of the Wild. Duhaime was born in Coral Springs, Florida, about 15 minutes from the arena where he played on Saturday night. He did a lot of his learning to play hockey at what still is the Panthers’ practice facility. “I was a big fan,” Duhaime said.

NOTES: Panthers C Aleksander Barkov (knee), who got hurt Tuesday and was expected to be evaluated on a week-to-week basis, was on the ice for an optional skate Saturday. Brunette didn’t know Barkov had gotten the work in. “A good sign,” he said. ... Minnesota hadn’t played at Florida since Dec. 3, 2019. ... Former Panthers forward Nick Bjugstad was among the scratches for the Wild.