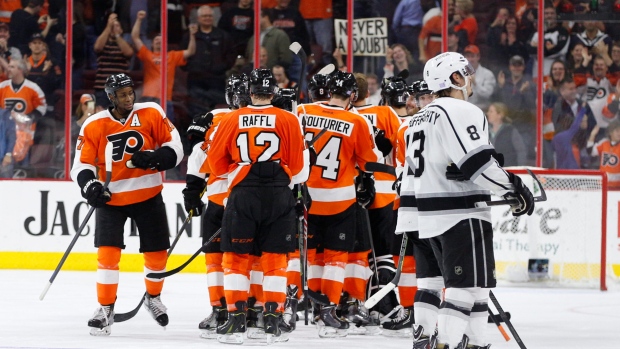 PHILADELPHIA - Brayden Schenn did not need a look at the videoboard to know his winning goal was good. He hopped twice on his skates and punched Los Angeles defenceman Drew Doughty's chest in a jubilant celebration.

Schenn scored 2:36 into overtime, and after a no-goal call was overturned following a brief review, the Philadelphia Flyers had snapped the Los Angeles Kings' six-game win streak with a 3-2 victory on Tuesday night.

"It's always a little bit of an awkward celebration for the winner but it's nice to score those goals," Schenn said.

Schenn beat Jonathan Quick on a breakaway, but the Kings goalie ended up on his knees and pushed back into the net. The review gave Schenn his third goal of the season.

"It doesn't matter what the referees say, they're the messenger," Kings coach Darryl Sutter said. "They have the right to review. So whether it was (the right call) or not, it doesn't matter what I think is correct or not correct. It really has no bearing on anything. He was safe at third and out at home."

Former Flyers captain Mike Richards scored the tying goal in the third period. Tyler Toffoli also scored for the Kings. Michael Raffl and Chris VandeVelde scored in regulation for the Flyers, when Philadelphia outshot the Kings 41-39.

With centre Anze Kopitar out with an upper-body injury and defenceman Slava Voynov suspended, the Kings ran into salary-cap issues and had only 19 players dressed for the game.

Raffl pounced when Claude Giroux's shot was blocked and scored his fifth goal of the season for a 1-0 lead. Toffoli also was in a perfect spot when the Flyers mishandled the puck. It bounced straight to Toffoli, who scored a short-handed goal late in the first.

"I kind of settled it down and made the move," Toffoli said.

VandeVelde, playing on the fourth line, scored with 43.7 seconds left in the first period for his first goal since 2012, lifting Philadelphia to a 2-1 lead. The Flyers pounded Quick with 20 shots in the first, but faded with seven in the second. Philadelphia's Ray Emery had 38 saves.

"It helps when the boys are playing like they are," Emery said. "When things are going well, it's always a bit easier in there."

Kings-Flyers has become a must-watch game in Philadelphia following the 2011 trades that sent Richards to Los Angeles and Jeff Carter to Columbus. Carter was traded only months later to Los Angeles and paired with his former Flyers teammate to win Stanley Cups in 2012 and 2014.

While the Flyers acquired Wayne Simmonds, Jakub Voracek and Schenn in the trades, they missed the playoffs in 2013 and were eliminated in the first round last season.

"It makes it a little extra special against a team that drafted you," Schenn said. "It's obviously a huge win for our team and we got to keep moving forward."

Voracek had two assists. Simmonds and Raffl are tied for the team lead in goals.

"I've been in Philly longer than I was in L.A. I think it's a bit overstated," Simmonds said. "But it's nice to play against some former friends."

Richards started and was booed in pregame introductions. The Flyers held a Halloween costume party for fans and several haunted the arena with defaced Richards No. 18 jerseys. One face-painted fan dressed as a ghoul in a No. 18 sweater and held a sign that read, "Sorry, Mike, but if you're not wearing orange and black, you're dead to us."

He was booed again when he tied the game with his first goal of the season.

"I have a lot of memories in here and you can't help but think about it a little bit," Richards said.

NOTES: The Kings allowed only five goals on their recent six-game homestand. ... Voracek has 13 points this season.