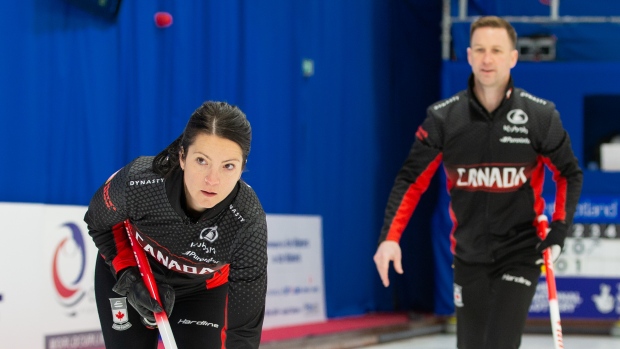 It's a two-win day for Kerri Einarson and Brad Gushue as Team Canada improves to 3-0 at the World Mixed Doubles Curling Championship following a 7-5 win over two-time world champions Dorottya Palancsa and Zsolt Kiss of Hungary.

The duo had already beaten Spain and Germany so far in the tournament which is taking place in Aberdeen, Scotland.

Canada is in Group A and will need to finish in the top three after a nine-game round robin to qualify for the playoffs. Group B also has 10 teams and the top seven overall duos after round robin play will qualify their countries for the Olympics.

Hungary is unable to sit two after their last stone as Canada improves to 3-0.

Using the power play, Hungary scores a deuce in the seventh. Canada will use their power play in the eighth and final end.

Hungary misses the double attempt on their last throw, leading to an easy draw for two for Kerri Einarson and Team Canada. They hold a four-point lead with two ends left.

After another great shot from Kerri Einarson, Hungary was forced to make a difficult angle runback to pick up the single point with three ends remaining.

After a great freeze by Kerri Einarson on her last throw, Hungary was left to only limit the damage. Shooting against two, Dorottya Palancsa made the soft tap to only give up a steal of one.

Kerri Einarson comes up clutch on the last throw of the end, drawing to the four-foot to put up another deuce for Canada. They lead 4-2 after three ends.

Kerri Einarson 🇨🇦 draws onto the button for a well executed score of two! 👏

Hungary strikes back a with a deuce of their own as last rock thrower Dorottya Palancsa drew to the four-foot to tie the game.

Kerri Einarson and Brad Gushue get off to a good start, putting up a deuce in the opening end.