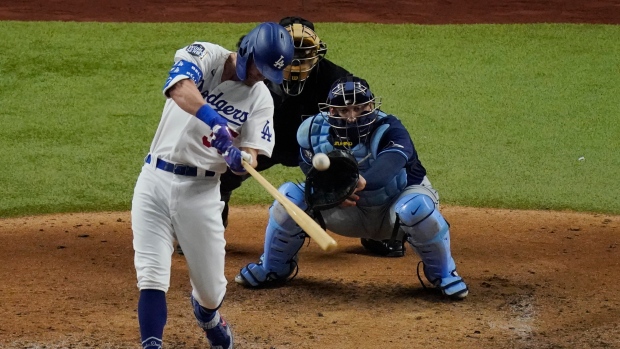 It all comes down to this. The Los Angeles Dodgers and Tampa Bay Rays are just four wins away from a championship as they meet in Game 1 of the World Series. Clayton Kershaw makes his fifth World Series start, while Tyler Glasnow makes his Fall Classic debut. Keep up with the action all game long with TSN.ca's Game 1 live blog.

11:14pm - Pedro Baez enters the game for the Dodgers in the eighth inning and gets a 1-2-3 inning of his own. Dodgers lead 8-3 going into the bottom of the eighth.

11:04pm - Josh Fleming gives the Rays exactly what they need with a 1-2-3 inning in the bottom of the seventh to hold the Dodgers at eight runs and Tampa Bay remains fives runs back with two innings to play.

10:58pm - Mike Zunino fires a 105.6 mph line drive right up the middle of the field, but Gonzalez snags it and turns to double off Brosseau at second base and escape the jam.

10:54pm - Kevin Kiermaier follows up the Brosseau single with a single of his own to score Wendle from third, the Rays now trail by five.

10:49pm - More gamesmanship from the Rays, as Mike Brosseau will now hit for Choi.

10:46pm - Joey Wendle doubles to give the Rays a runner of second and third with one out. Ji-Man Choi enters the game to pinch hit with the Rays down seven, and the Dodgers counter with brining in lefty Victor Gonzalez.

10:40pm - Dylan Floro takes the mound for the Dodgers to start the seventh inning, meaning Clayton Kershaw's night is over. Kershaw finishes the night with eight strikeouts and gives up just one run on two hits.

10:30pm - MOOKIE NUKE - In the fifth Mookie Betts did it with his legs, in the sixth he leads off the inning with a home run to right field.

10:26pm - The long wait between innings means nothing for Kershaw as he comes out for the sixth inning and needs just nine pitches to retire the Rays in order.

10:18pm - Los Angeles adds two more runs before Austin Barnes flies out to end the inning. The Dodgers score four in the fifth to extend their lead to five runs.

10:07pm - DODGERS CHASE GLASNOW - Will Smith singles in another run and Tyler Glasnow's night has come to an end. He leaves with one out in the fifth, two runners on base and trailing 4-1.

10:00pm  - MOOKIE MAGIC - Mookie Betts walks to lead off the fifth inning, steals second and third and scores from third on a ground ball hit to the first baseman. The Dodgers regain their two-run and now are up 3-1.

9:43pm - KIERMAIER GOES DEEP - Kevin Kiermaier cuts the Dodgers lead in half with a home run to right field.

9:38pm - Glasnow walked the next batter following the Bellinger home run, but limits the damage by striking out the final two batters of the inning. The Dodgers lead 2-0 heading to the fifth inning.

9:25pm - BELLI BOMB - Cody Bellinger opens the scoring with a two-run home run to right field. It's his second in two games.

9:18pm - Another three up-three down inning for Kershaw. He now has six strikeouts after four innings and has not given up a hit since the leadoff single to start the game.

9:09pm - GLASNOW ANSWERS - Tyler Glasnow gives up a walk to Corey Seager but strikes out the side. The 26-year-old now has five strikeouts after three innings.

8:57pm - KERSHAW CRUISING- Clayton Kershaw has retired eight-straight Rays players and picks up his third and fourth strikeouts. The 32-year-old has given up just two base runners through three innings.

8:51pm - Glasnow gives up his first hit of the night, but nothing more and we're headed to the third inning tied 0-0.

8:40pm - ABC, easy as an 1-2-3 inning for Kershaw. The southpaw needed just 11 pitches to get through his second inning of work.

8:34pm - Glasnow gives up a walk to Corey Seager and nothing more. Off to the second inning we go.

8:26pm - Just like his Kershaw, Glasnow opens his night with a first-pitch fastball for a strike.

8:23pm - Díaz leads off the game with a single and Randy Arozarena reaches on a walk, but the Rays fail to capitalize and we're headed to the bottom of the first tied 0-0.

8:11pm - We are underway, Clayton Kershaw fires a first pitch strike to Yandy Díaz to begin the World Series.

Over his six World Series appearances, Kershaw is 1-2 with a 5.40 ERA in 26.2 innings. The southpaw has made three starts in the 2020 playoffs, picking up wins over the Milwaukee Brewers and San Diego Padres. But he struggled in his only start of the NLCS, giving up four runs in five innings to the Atlanta Braves, getting tagged with the loss.

Glasnow, 26, starts the first World Series game for the Rays since 2008. Like his counterpart, Glasnow picked up a win in the opening two rounds of the playoffs, shutting down the Toronto Blue Jays, and holding the New York Yankees to four runs through 7.1 innings. The righty was tagged with the loss in his only ALCS start when he tossed six innings, giving up eight hits and four earned runs.