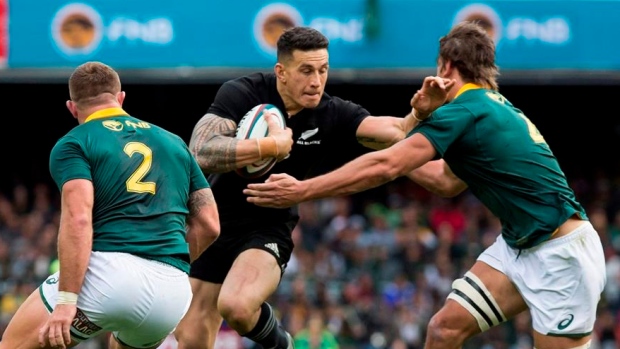 Former All Black star Sonny Bill Williams trained with the Toronto Wolfpack for the first time Thursday as coach Brian McDermott's overseas talent joined the rest of the squad at the transatlantic rugby league team's training base in England.

"It's been a good day, it's been an enjoyable day," McDermott said. "First time the whole group's been together since the Grand Final last year."

The Wolfpack won promotion on Oct. 5 with a 24-6 win over Featherstone Rovers in the Million Pound Game. That earned them a spot in the Super League, the top rugby league circuit in the Northern Hemisphere, alongside 10 English clubs and France's Catalan Dragons.

The 34-year-old Williams is Toronto's biggest off-season recruit. A veteran of 58 internationals with the All Blacks, the New Zealander is one of the most recognizable names in world rugby having won championships in both rugby union and league.

The Wolfpack opened the vault to get him, with a two-year deal worth a total of $9 million, with Williams getting an ownership stake, according to a source granted anonymity because they were not in a position to publicly divulge the information.

Toronto's English-based talent started camp in early November with Williams and other overseas players joining them Thursday at the club's training facility in the Manchester area.

"He's come back in great shape," McDermott said of Williams, who last saw action Nov. 1 in the third-place game at the Rugby World Cup in Japan. "The guy's a training freak, anyway, a gym freak. You can't keep him out of the gym. He looks good."

McDermott says all the players reported in good shape.

"Everybody is aware that the challenge this year is going to be significant," he said.

Forward Andrew Dixon and New Zealand international back Chase Stanley are expected to rejoin the team in the next few days, bringing the roster up to 23.

"We're near the end of the (salary) cap. We don't have much cap space to buy any more, which is a real issue," said McDermott, who got a new five-year contract in November.

"My squad is very exposed," he added. "If we get injuries, if we get two or three players injured on a 23-man squad, we start to look really skinny."

Rugby League is a 13-player game with teams dressing 17 for matches.

The Wolfpack coach had hoped to increase his roster to 30 players given the travel schedule and rigours of Super League play. But he says the North American franchise faces challenges that most clubs don't.

McDermott says Toronto, like London Broncos, is forced to overpay for talent because of the size of the market and cost of living.

And without the academy or reserve-grade infrastructure that other Super League clubs have, Toronto is unable to take advantage of some salary cap rules. For example, players No. 25 to 30 on the roster — usually younger or developmental talent — don't count against the cap. The Wolfpack don't have access to such.

Like Major League Soccer, Super League has a marquee player designation with two allowed per club. Williams will fall under this category, meaning he will count just 150,000 pounds ($255,900) against the cap.

Australian-born Samoan international centre Ricky Leutele and Australian forward Darcy Lussick occupied the marquee players slots in 2019. The club has said it will be Williams and Leutele in 2020 with Lussick becoming another big-ticket salary that the Wolfpack have to squeeze under the cap.

Toronto officials have argued that the North American side needs some leeway in roster and salary cap rules to be competitive in the Super League. While perhaps valid, it's an argument unlikely to sway rival clubs more worried about their own fate than easing the way for the Wolfpack.

McDermott points no fingers, acknowledging the Wolfpack are breaking new ground and creating issues the existing rule book didn't anticipate. He just believes a competitive North American franchise is good for the game and notes loopholes created in the past to help the expansion Catalan Dragons (in Super League) and Melbourne Storm (in Australia's National Rugby League) find their feet.

The Wolfpack kick off their Super League season Feb. 2 against Castleford Tigers. The home opener is April 18 against Hull FC.

This report by The Canadian Press was first published Jan. 2, 2019.