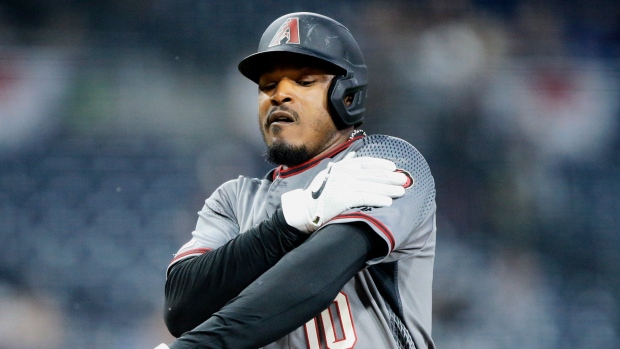 SAN DIEGO — Outfielder Adam Jones and the Orix Buffaloes of Japan's Pacific League have agreed to an $8 million, two-year contract.

“They have expressed to my family and I that they value everything I bring to the game, and have proven that by offering me a 2 year guaranteed deal with a chance to play a 3rd year and beyond," Jones wrote on Instagram on Tuesday. “My family and I are very, very excited about this new chapter in our lives."

The move to Japan means the 34-year-old Jones may now be able to play for the United States at the 2020 Tokyo Olympics. He made a memorable catch for the U.S. at the 2017 World Baseball Classic, robbing Manny Machado of a home run at Dodger Stadium.

Unlike Major League Baseball, the Japanese Nippon Professional League will put its season on pause so players can participate in the Olympics. The U.S. has not yet qualified for the Tokyo Games.

Jones' deal includes bonus opportunities, escalator clauses and a 2022 club option that could make it worth up to $10 million over two seasons and $15.5 million over three.

“You all be good and play nice over there especially with the CBA coming to an end," Jones said, referring to the MLB collective bargaining agreement that expires after the 2021 season. “There is enough to go around, just work it out!! I’m out for now."

He added: “I can’t wait to eat that amazing Kobe beef!!”

Jones made $4.5 million in salary and performance bonuses based on plate appearances last season with Arizona.

A five-time All-Star and four-time Gold Glove winner with Baltimore, Jones spent his first two big league seasons with Seattle and played for the Orioles from 2008-18. He has a .277 career average with 282 homers, and 945 RBIs in 14 major league seasons.

Jones left Baltimore as a free agent after completing a six-year contract that guaranteed $85.5 million.

In May 2017, he said fans at Boston's Fenway Park directed racial slurs at him and a fan throw peanuts toward him in the dugout. Red Sox officials apologized, and black players said what he experienced was an ongoing experience during trips.