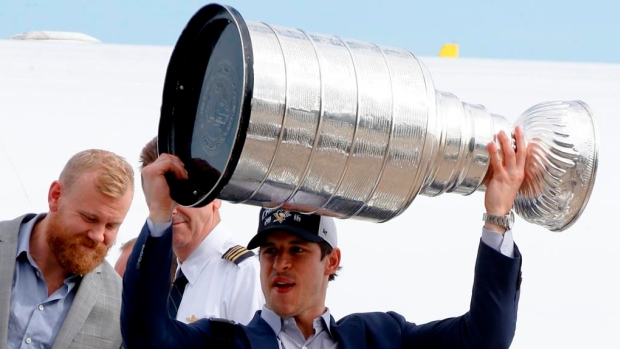 HALIFAX — Momentum is building in a small Nova Scotia community to rename a street in honour of hockey superstar Sidney Crosby.

Paul Mason, who coached the two-time Stanley Cup winner when he was a young sports phenom in Cole Harbour, raised the idea after watching his former protege hoist the cup with his Pittsburgh Penguins teammates Sunday.

He saw the proposal quickly gain traction on social media sites, fuelled by the enthusiasm of fans in Crosby's hockey-mad hometown, as well as municipal councillors and Halifax's mayor.

"It's definitely taken on a life of its own — I totally think it should happen," Mason said in an interview.

"Sid represents his community, his province, his country very well. He's done things that no one else from our province and very few from our country have done."

Mason, who was Crosby's hockey and baseball coach between the ages of 10 and 13, says he would like to see Forest Hills Parkway named after the Penguins' captain. He said the road is home to many of the rinks Crosby grew up playing in as a youngster in Cole Harbour.

"It's known to a lot of the hockey community as the street where the rinks are and I just think it would be very fitting that that would be called Sidney Crosby Parkway or something of that nature," he said.

Lorelei Nicoll, the councillor for Cole Harbour, said Tuesday that she will put forward a motion to look into naming a street after Crosby. Wearing a T-shirt bearing both Crosby's and the community's name — along with Cole Harbour's other famous hockey progeny, Nathan MacKinnon — Nicoll said she would ask for a staff report on a possible renaming.

"Cole Harbour's very proud," she said during a city council meeting. "So I ask for council support when that comes up."

The process could be stymied by administrative orders in Halifax Regional Municipality that suggest renaming a street could only be done when the person being honoured is retired or has fulfilled "25 years or more of volunteer service." Nicoll said she would see if council would consider making an exception.

It's a hurdle Mason thinks should be worked around to celebrate someone who has brought home top honours from the World Juniors, the Olympics and in the NHL by also winning the Conn Smythe Trophy as the most valuable player in the playoffs.

"I thought that's foolish. You don't want to wait till then. You want to recognize those people in your community when you get the opportunity," he said, adding that it would require $2,000 and a poll of businesses on Forest Hills Parkway to see if they are amenable to the change.

He notes that Sweden issued a stamp commemorating Peter Forsberg after he scored the winning goal in the 1994 Olympics, Newfoundland named a street after curling champ Brad Gushue and former NHL player Jody Shelley has a street named in his honour in his hometown of Yarmouth, N.S.

Mason's Facebook page was plugged with messages supporting the initiative and calling on council to amend its policy to allow the change.

"No one is more well deserved of this," wrote one person. "I'd say a legacy has already been established."

- By Alison Auld and Aly Thomson