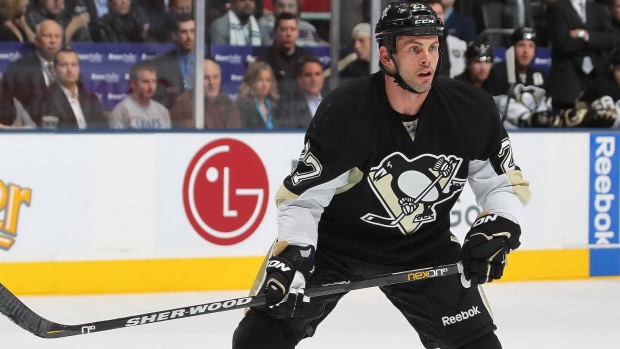 Craig Adams, a two-time Stanley Cup winner who played 951 games in the National Hockey League, is pledging to donate his brain to researchers who are exploring the long-term impact of repeated brain trauma.

“I’m not going to need my brain [after I die] so it was a pretty easy decision,” Adams said in a Nov. 15 interview with TSN. “I think it’s really important to expand the sample size of brains being studied. Researchers need to be able to study what we assume are healthy brains because we need some point of reference and comparison, so they aren’t only testing the brains of players who really degenerated in their 40s and 50s and maybe took their own lives.”

Adams, 40, won Stanley Cups with the Carolina Hurricanes in 2006 and the Pittsburgh Penguins in 2009. He said that he has made the decision to donate his brain to scientists at the CTE Center at Boston University. Dr. Ann McKee, a neuropathologist there, has studied the brains of more than 100 former pro football players and a handful of former NHL players to establish whether repeated head trauma leads to CTE.

Chronic traumatic encephalopathy, or CTE, can only be detected through a postmortem examination of the brain. The brain-withering disease has been linked to mood swings, depression and violent behaviour and is caused by repeated blows to the head, researchers say.

In April, Dr. McKee said she has also diagnosed CTE in the brains of four former junior hockey players. Each of the four former junior players – none of whom advanced to the National Hockey League – committed suicide before the age of 30, she said.

Adams grew up in the Calgary area, played four years at Harvard University, and then lasted 15 seasons in the NHL.

He said that he has never had a diagnosed concussion.

“Some guys have been more prone to them than others,” Adams said. “For whatever reason, I definitely knew there were times when I was out of it for a second and maybe even lost consciousness for a split second and, for whatever reason, I just didn’t have symptoms. I didn’t feel like I was concussed, went through some of the field testing, and it was return to play. Then I had some teammates who took hits that were somewhat innocuous and missed six months. I don’t know why that was.”

Other former NHL players including Ted Drury, Shawn McEachern and Bob Sweeney have pledged to donate their brains to the C.T.E. Center, said Chris Nowinski, a co-founder and the chief executive of the Concussion Legacy Foundation, which helps to find brain donors for Boston University.

Adams, who now works as a financial advisor for hockey players at Merrill Lynch in Boston, said he hopes his pledge will foster more discussion in the NHL about brain injury research.

“We’re in the very early stages of understanding about brains and trauma and I certainly hope for us as a group – for myself and my friends – that we are going to find one day that there is not as high an incidence rate of CTE in hockey as we’re seeing in football,” he said.

Adams formally retired in January 2016 and said more players are talking about concussions and recognizing the dangers of playing through head injuries.

“The big-time head impacts where you have a guy knocked out cold are not the only injuries that are having lasting effects in a guy’s life,” he said. “It can be equally as bad or worse to be exposed to many, many smaller traumas.

“The conversation about concussions has changed a lot from the time I came into the league in the late 1990s. The level of awareness is night and day to what it was. I’d have a hard time believing there’s a coach or GM or trainer in the NHL today who is pressuring someone to come back early from a head injury. Maybe in the past it was the athlete himself who was the judge. It was, ‘How do you feel?’ and, ‘You okay to come back?’ We all know how that goes with hockey players.”