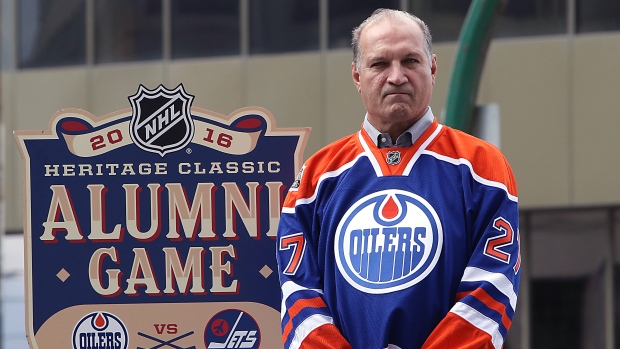 EDMONTON — Dave Semenko, the former NHL tough guy who served as Wayne Gretzky's bodyguard and once went three rounds with boxing legend Muhammad Ali, has died after a battle with cancer. He was 59.

The Edmonton Oilers confirmed Semenko's death in a statement Thursday.

"Dave will be remembered as a fierce competitor, loyal teammate, fan favourite and dear friend to so many," the team said. "His legendary toughness on the ice is surpassed only by his kindness and caring for others, and his equally legendary wit and sense of humour."

Semenko, a Winnipeg native, joined the Oilers for the 1977-78 World Hockey Association season and played in Edmonton until he was traded to Hartford on Dec. 12, 1986. Over that time he amassed 1,279 penalty minutes over 596 WHA and NHL games while opening up the ice for Gretzky and the Oilers' skilled forwards. He helped Edmonton win its first two Stanley Cups in 1984 and 1985.

While not a prolific goal-scorer — he had 81 over his pro career in a career playing on some of the most potent offensive teams in professional hockey — Semenko did score the last ever goal in WHA history before the league merged with the NHL.

A feared pugilist on the ice, Semenko also fought Ali in an exhibition bout in Edmonton on June 12, 1983. The three-round match was judged a draw, though The Associated Press's report on the fight said Ali, a three-time world heavyweight champion, mostly toyed with Semenko.

It's a sad day for hockey and Edmonton. Dave was the truest example of a protector and teammate. A great man who will be missed. RIP #27

After retiring, he became a colour commentator on Oilers radio broadcasts and an assistant coach with Edmonton during the 1996-97 season.