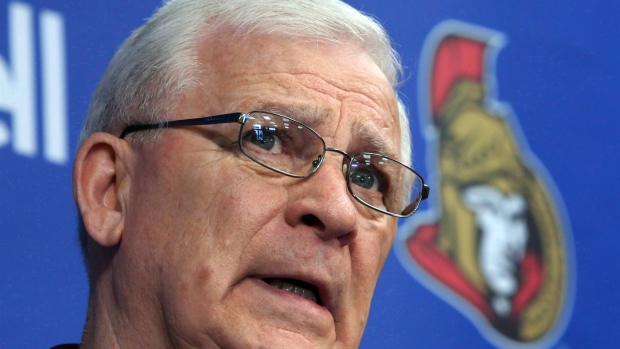 OTTAWA — Bryan Murray, an NHL coaching giant known for his rapier wit, acute hockey sense and, ultimately, courage in his fight against cancer, has died. He was 74.

The Ottawa Senators confirmed Murray's death in a release on Saturday. The former NHL coach and general manager, who remained in the game until his death, had been fighting Stage 4 colon cancer for the past three years.

Murray received the cancer diagnosis in the summer of 2014, but he waged a valiant, public battle against the disease, remaining actively involved with the Senators as a senior adviser after stepping down as general manager after the 2015-16 season.

"I owe a lot to Bryan as he gave me a shot and he's a big reason why I'm playing in the NHL, " said Senators forward Zack Smith. "It was heartbreaking news to hear of his passing. He was always honest with guys and was just great to work with. "

"My thoughts and prayers are with the entire Murray family," Senators captain Erik Karlsson added on Twitter. "Thank you for everything Bryan. You gave me the chance to be who I am today."

Over his 35 years of working in the NHL, Murray won the Jack Adams award as NHL coach of the year in 1984 with the Washington Capitals and executive of the year as general manager of the Florida Panthers in 1993.

"Bryan Murray's strength and character were reflected in the teams he coached and the teams he built over decades of front office excellence," NHL commissioner Gary Bettman said in a statement. "While his warmth and dry sense of humour were always evident, they were accompanied by the fiery competitiveness and determination that were his trademarks.

"As we mourn Bryan's passing, we celebrate his many contributions to the game — as well as his courage. The National Hockey League family sends our deepest condolences, comfort and support to Bryan's family, his many friends and all whose lives he influenced."

While best known for his work as a GM and NHL coach Murray is also fondly remembered as a loving husband, devoted father, doting grandfather and loyal friend.

"I will always be appreciative of the opportunity Bryan gave me," said Cory Clouston, who got his first NHL coaching job from Murray with the Senators. "I will always remember his sense of humour.

"He was a great storyteller. He loved the game of hockey and his enthusiasm for the game was contagious. I have nothing but great memories of Bryan. My thoughts and prayers are with his family who I was lucky to meet many of and spend time with."

Murray grew up in Shawville, Que., a small town located in Western Quebec, and while his hockey career took him across North America he always held a fondness for his childhood home.

It was his relationship with Shawville, where family and childhood friends continue to reside, that made working with the nearby Senators so appealing.

A graduate of McGill University with a degree in physical education, Murray returned to Shawville to work as a phys-ed teacher at the local high school where he also coached minor hockey.

Murray then went on to coach with the Pembroke Lumber Kings of the CJHL in 1973. He quickly gained a solid reputation and was offered a head coaching position with the Regina Pats of the Western Hockey League in 1979.

In his first season Murray led the Pats to the Memorial Cup with a 47-24-1 record.

Murray posted a 25-28-13 record in 66 games in his first year behind the Capitals bench. He then led Washington to seven straight playoff appearances, a first for the franchise, ultimately landing him the 1984 Jack Adams. But in 1990, with the team struggling, Murray was fired and replaced by his brother, Terry.

"Not only do we recognize his service to the Capitals, but also across several facets of the National Hockey League," the team said in a statement. "Bryan devoted an incredible life to the sport, and his presence will be deeply missed."

Murray wasn't out of work long as he was hired by the Detroit Red Wings at the start of the 1990-91 season as head coach and general manager where he spent three seasons behind the bench. Murray led the Red Wings to the playoffs three straight seasons, but never past the second round and following the 1992-93 season was replaced by Scotty Bowman behind the bench. Murray remained in Detroit as general manager for the 1993-94 season.

After being relieved of his duties in Detroit, Murray was quickly back at work being named the Florida Panthers general manager in August 1994.

In just two seasons Murray stunned the hockey world when the young Florida franchise advanced to the Stanley Cup final. The Panthers were swept by the Colorado Avalanche, but Murray was named the NHL Executive of the Year.

After firing head coach Doug MacLean, Murray took over behind the Panthers bench for the remainder of the 1997-98 season before hiring Terry as head coach the following season.

After six and a half years with the Panthers Murray was let go as general manager, but like so many times before he quickly rebounded and landed in Anaheim as head coach of the Ducks.

Murray spent one year behind the bench with the Ducks before taking on the role of general manager. In 2004 Murray surprised many by resigning to take on the role of the Senators head coach.

In 2007 Murray led the current incarnation of the Senators to their one and only Stanley Cup final appearance against the Ducks, which Ottawa lost in five games.

Murray was extremely well liked and respected by players within the Senators organization.

"I can't say enough about Bryan," said longtime Senator Mike Fisher. "He was always so good to me and when it came time to move me he could have traded me anywhere, but he wanted (wife and country music star Carrie underwood) and I to be together and he was able to make a deal with (Predators GM David Poile) to get me to Nashville.

"That's just the kind of guy he was. He always thought about you as more than just a player. He wanted what was best for you as a person."

Smith said in many ways some of his fondest memories of Murray are from the time he stepped down as GM and took on an advisory role.

"He would come in and just sit down with guys," he said. It wasn't even always about hockey. He never once complained about what he was going through. It was great having that time with him."

Even after his diagnosis Murray chose to remain active in the game, saying it was one of the reasons he was able to fight the disease, but after nine seasons as the Senators general manager Murray announced on April 10, 2016 that he would be stepping down and taking on the role of senior adviser.

It was his way of staying in the game he loved, but also wanting to devote more time to his family.

Murray went public with his diagnosis to encourage people to get colonoscopies and understand the importance of catching the disease as early as possible.

"He was never sick — I mean never, ever sick," Poile, who was GM in Washington when Murray was coach, told The Associated Press. "To get cancer, which is as bad as it gets, it's like you've got to be kidding. There's no ryhme or reason, there's no fairness to it at all.

"He and his family took on the battle, and I think the fact that he is who he is being a public figure being very well-known in Canada and specifically the Ottawa area I think he did a tremendous amount for hopefully the eventual cure of cancer."

Murray, during an interview in 2015, said: "It's a subject that's not often talked about, but hopefully my coming forward can make a difference, even if it's just for one person. Sometimes as hockey people we feel a little invincible and we don't always want to talk about this kind of thing, but maybe we need to change that. Hopefully this will help."

This past season the Senators made Murray the first inductee into their Ring of Honour.

"The ultimate achievement in sport is to be recognized at the very top of the game and I know that winning a Cup is the ultimate goal for all of us and it's a great achievement, but I think when you help develop people, influence people, do things for the game, in the game, be involved in your community those are all things that are ... maybe just as important," he said.