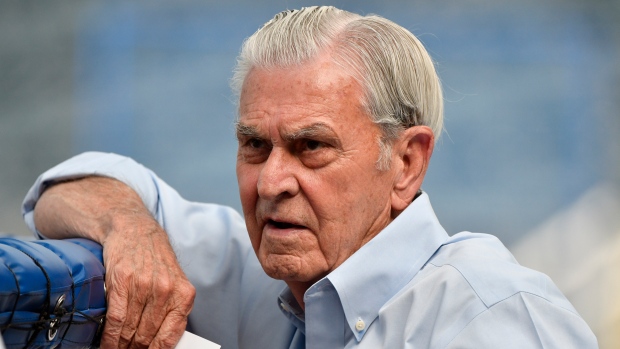 The Glass family said the businessman died Jan. 9. He had been dealing with health issues for some time.

Glass began negotiations early last year to sell the Royals, who reached the World Series twice under his ownership and won the title in 2015. The deal valued at about $1 billion with a group led by Kansas City businessman John Sherman was completed Nov. 26 after Major League Baseball owners voted unanimously to approve it.

“I am deeply saddened by the news of David’s passing,” Sherman said in a statement. ”His voice among other owners was so respected. He served on and led several Major League Baseball committees to better our game. His passion for baseball and love for Kansas City was the driving force in bringing success on the field for this franchise.

“Personally, I will be forever indebted to David for reaching out to offer the generational opportunity to be part of this proud and storied franchise,” Sherman added. “On behalf of the entire ownership group, I want to express deepest gratitude to the heart of a man who carefully placed a treasure in the hands of Kansas Citians. We pledge to carry it forward with his passionate commitment and selfless spirit.”

Glass was born in Mountain, View, Missouri, and joined the U.S. Army after he was graduated from high school. He earned a degree from Missouri State before beginning his business career at Crank Drug Company in 1960.

Glass left the company in 1968 and worked for two other companies until 1976, when Walmart founder Sam Walter recruited him to be his company's chief financial officer. Glass continued to take on a bigger role with the company until 1988, when he was named president and CEO of the retail giant. Over the ensuing 12 years, he led the company through a period of dramatic growth and expansions internationally and into new retail formats.

""When we lost my dad, David provided a steady, visionary hand the company needed to lead it forward. He did so with a deep sense of humility while maintaining the values and principles dad founded the company on," former Walmart chairman Rob Walton said. "More than anyone beyond Sam Walton, David Glass is responsible for making Walmart the company it is today. On behalf of the entire Walton family, I want to express our appreciation for David as a leader and as a friend. He will be deeply missed."

He also will be missed in Kansas City, his home-away-from home due to his ownership of the Royals.

Glass helped to keep the franchise in Kansas City following the death of founding owner Ewing Kauffman in 1993. He served as caretaker of the organization until April 2000, when he purchased sole ownership for $96 million — a strong bid at the time. And while his ownership will be remembered for two American League pennants and a World Series trophy, for many years he was considered a pariah among fans for his notoriously frugal ways.

The Royals endured many 100-loss seasons, and they became known for trading top talent while refusing to sign notable free agents. Many fans also viewed him as an absentee owner more committed to Arkansas than Kansas City.

But most of those opinions changed when Glass hired Dayton Moore as general manager in 2006. Glass vowed to build the organization the right way, and he gave Moore the resources and responsibility to accomplish that objective.

“When I sat down across the table from Mr. Glass, as he began to share his vision for the Kansas City Royals, it was all about wanting to create a model organization,” Moore said Friday. “It was all about putting a competitive team on the field for our fans and our city. I came to understand he owner a baseball team for all the right reasons. It wasn't about him as an owner, it was about being a great steward of the franchise and preserving the great game he enjoyed as a little boy.”

Glass continued that enjoyment even after he agreed to sell the franchise. He showed up to Kauffman Stadium several times late in the season, watching the Royals with the same boyhood fascination as always.

“I'm here because where else would you want to be on a Saturday evening but the ballpark?" Glass said told The Associated Press one September afternoon, leaning over the dugout during batting practice. “I'm not going to stop enjoying baseball. I went to my first game in 1946 and I've been a baseball junkie ever since.”

Baseball Commissioner Rob Manfred said in a statement that “Glass was one of our game's most active and respected owners for more than a quarter of a century.”

“While providing great leadership for our industry, he also was a tremendous fan of the game. The Royals’ 2015 World Championship was a tribute to his stewardship of the franchise and his passion for baseball in Kansas City.”

Glass had been in declining health, increasing his urgency to sell the club. But he had called Moore on Christmas Day and later said he was looking forward to attending spring training with a group of his friends.

“We weren't expecting to get this news this early in 2020, that's for sure,” Moore said.

Regardless of how he was perceived by the public, Glass always had the unwavering support of Moore and Ned Yost, his longtime manager. Yost even called watching Glass raise the World Series trophy at Citi Field in 2015 "one of the top three highlights of my baseball career, because we had accomplished it for him."

"I will never forget the thrill of seeing over 800,000 people of this community come together on one sunny November day to salute the newly crowned world champions. It's been a fantastic ride," Glass said upon announcing the sale of the franchise, "and I want to thank our great fans for supporting us through the years. But now it's time for someone else to oversee this franchise into its next championship."

During his ownership of the Royals, Glass served on key MLB committees. He was the chairman of MLB Advanced Media, a member of Major League Baseball's executive council and — not surprising, given his background — an integral part of the finance committee.

Glass was elected to the board of the Hall of Fame, too.

Glass and his wife, Ruth, have three children, six grandchildren and seven great-grandchildren. They also were actively involved in several philanthropic endeavours, and Missouri State named its business hall in his honour.

The family said a memorial will be held Jan. 27 at Northwest Arkansas Fellowship Bible Church in Rogers, Arkansas.

“Due to his authentic humility, we think David Glass may be the most under-appreciated CEO in the history of business," said Doug McMillon, the current president and CEO of Walmart. "The choices he made and the results of the company reflect his wisdom, dedication and servant leadership. We will miss him immensely and are eternally grateful.”