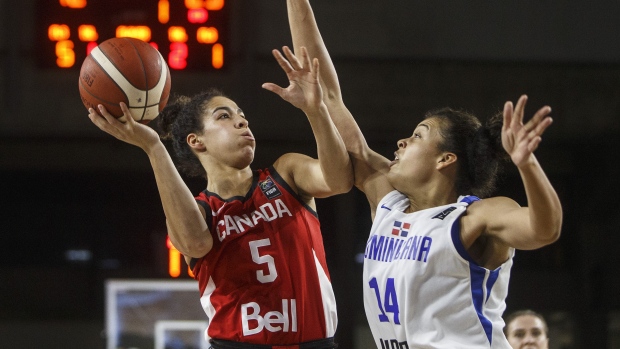 Eight victories in nine games over the past six months, and a best-ever No. 4 world ranking.

The Canadian women tip off their final Olympic qualifying tournament in Ostend, Belgium against the home team on Thursday, but will also need a victory on Saturday against Sweden to secure their ticket to Tokyo.

"It's not an easy pool," Thomaidis said. "You really have to go in with the mindset that you have to win all of them, you can't just plan for one."

Because Japan, the fourth team in Canada's pool, has an automatic Olympic berth as host, the Canadians need only to finish ahead of either Belgium or Sweden to be Tokyo-bound.

Four tournaments this week across multiple sites in Belgium, Bourges, France, and Belgrade, Serbia, will determine the women's Olympic field, a departure from previous years which featured a continental qualifier a year out from the Olympics followed by a last-chance event just weeks from the Games.

Tokyo qualifying saw the Canadians go 5-1 — their only loss was to the Americans — in Puerto Rico in September, and then 3-0 in November in Edmonton, where they outscored their opponents by a combined 111 points through the three wins.

Thomaidis definitely sees the positives in the new qualifying format.

"Part of me does (like it), absolutely," she said. "It is a short timeframe to get everyone in and get your systems in place, and to be ready to play at your best, but you get more touchpoints throughout the year. We were just together nine weeks ago, compared to when we go about 10 months or nine months without seeing each other, so that part's great, the fact that FIBA breaks, and all their leagues break so we get all of our players."

Women's professional leagues shut down during the qualifying periods, and so Thomaidis has all of her stars in Belgium including WNBA standouts Kia Nurse and Natalie Achonwa.

The national team previously only operated in the summer, which conflicts with the WNBA season.

"And so we would sometimes go years without seeing our players who are in the WNBA," Thomaidis said. "So this is a pretty nice way to still be in contact with them, and work with them, and have that cohesion developing throughout the course of a number of years."

The one drawback is four years ago at this time, an Olympic berth was already in the bag. The Canadians had qualified at the FIBA Americas tournament in Edmonton.

"So now we have this compressed timeline," said Thomaidis. "But you've just got to roll with it and be able to adapt to different systems and we're making the best of it and seeing a lot of positives in it, more than anything else."

That already betters the previous high of five teams at a non-boycotted Games — excluding the 1976 Olympics in Montreal when the country sent nine teams as a host.

Canada's women's soccer team could become No. 7. The Canadians play Costa Rica on Friday in Carson, Calif., in he semifinals of the CONCACAF Olympic championships. Semifinal winners book tickets to Tokyo.