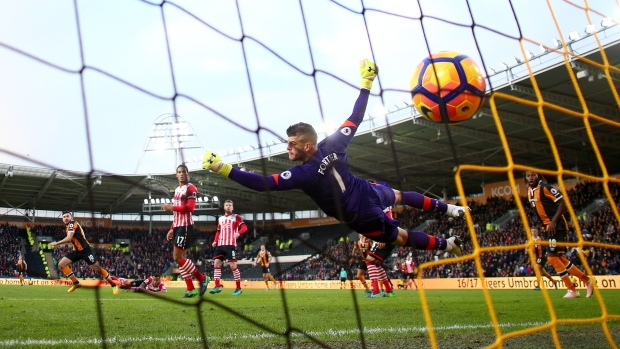 LONDON (AP) — England goalkeeper Fraser Forster will end his eight-year spell at Southampton by joining Tottenham on a free transfer when his contract expires at the end of the month.

His move to Tottenham — likely as the backup to Hugo Lloris — was announced on Wednesday, with the 34-year-old Forster agreeing to a two-year deal.

“This is a fantastic opportunity for me,” Forster said. “When a team like this comes along, it’s impossible to say no. I couldn’t get here fast enough to get it done."

Forster, who made 162 appearances for Southampton since 2014, has played six times for England and was called up as recently as March. He was part of England's squads at the 2014 World Cup and the European Championship in 2016.

Leeds signed a second player from Austrian club Salzburg, where manager Jesse Marsch was once coach, by bringing in Denmark right back Rasmus Kristensen on a five-year deal.

Kristensen, who scored 10 goals in 44 games last season, will join on July 1 and follows Brenden Aaronson from Salzburg.

Left back Matt Targett completed a permanent move to Newcastle, having been at the club on loan from Aston Villa for the second half of last season.