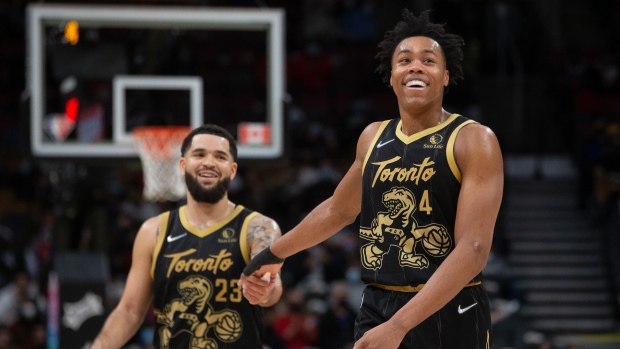 Toronto Raptors forward Scottie Barnes is available and will start while guard Fred VanVleet and centre Khem Birch are both out for Wednesday's game in Chicago against the Bulls.

Barnes is available. VanVleet is out.

VanVleet and Barnes had been listed as game-time decisions while Birch was confirmed as out earlier Wednesday.

All three players missed Tuesday's win over the Charlotte Hornets. Both VanVleet (knee) and Barnes (wrist) were missing their first game, while Birch sat out his sixth straight because of a broken nose he suffered against the Detroit Pistons on Jan. 14.

VanVleet is averaging a career-best 21.7 points and 7.0 assists per game on 42.1 per cent shooting from the field. Barnes, the No. 4 overall pick last summer, is averaging 14.6 points and 7.8 rebounds while shooting just shy of 47 per cent. Birch is scoring 5.8 points a night in 23 games.

After their matchup with the Bulls, Toronto will head to Miami to take on the Heat Saturday night.