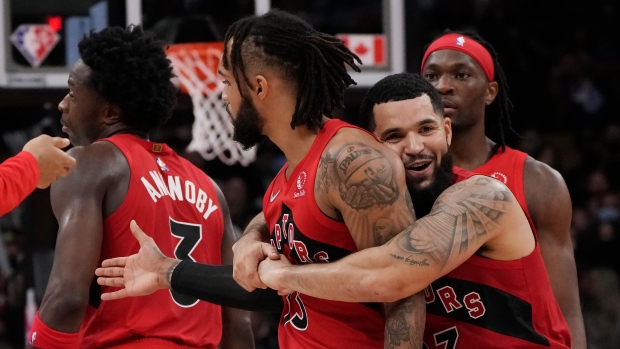 TORONTO — Fred VanVleet had 26 points and a career-high 10 rebounds and OG Anunoby added 25 points as the Toronto Raptors defeated the Indiana Pacers 118-100 on Wednesday night for their first home victory of the season.

Rookie swingman Scottie Barnes chipped in with 18 points for the Raptors (2-3), who had dropped their first three games at Scotiabank Arena.

Malcolm Brogdon led Indiana (1-4) with 18 points. Pacers forward Domantas Sabonis, who was averaging 24.8 points per game entering play, had a team-high eight rebounds but was held to just nine points.

Barnes delivered a running one-handed slam dunk early in the fourth quarter to the delight of the sellout crowd of 19,800, giving Toronto a 98-78 lead.

VanVleet's previous career high was nine rebounds in a game against Washington on Dec. 20, 2019.

Anunoby set the early offensive tone with 11 points over the first eight minutes. He had 16 points in the first quarter to help stake Toronto to a 29-24 lead.

Indiana opened the second quarter on a 9-2 run. Svi Mykhailiuk restored Toronto's lead with a three-pointer that put the Raptors up 34-33.

Anunoby also flashed some defensive skills, crossing the court and fully extending to block a Brogdon shot from the wing. VanVleet made a three-pointer on Toronto's next possession to give the Raptors a 57-48 advantage, a score that held into the halftime break.

The Pacers had some early success when they penetrated down low with Brogdon leading the way with 16 first-half points. But Indiana struggled from distance over the first two quarters, converting just two of 14 three-point attempts.

Barnes and Toronto native Dalano Banton provided some offensive spark early in the second half. Anunoby ended a long scoring drought with a three-pointer late in the third quarter and VanVleet added a deep three just before the buzzer to give Toronto an 87-71 lead.

Toronto will close out its four-game homestand Friday against the Orlando Magic. The Pacers will continue their road trip with a visit to Brooklyn that night.