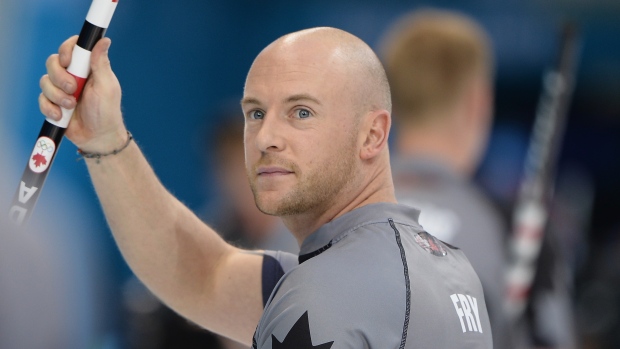 After reflecting on his actions at the Red Deer Curling Classic, curler Ryan Fry said Wednesday that he'll be taking an indefinite leave from Team Brad Jacobs to focus on his "growth and self-improvement."

Fry, who played at the World Curling Tour event as a substitute, was disqualified along with teammates Jamie Koe, Chris Schille and DJ Kidby for what organizers called unsportsmanlike behaviour resulting from excessive drinking. All four players later issued statements to apologize for their actions.

Organizers said Fry broke three brooms and that the team used foul language and was disruptive to other players on the ice.

"I have spent the last few days reflecting on what happened during the Red Deer Curling Classic," Fry said in a statement on Twitter. "It has made me take a hard look in the mirror to understand what fuelled my unprofessional actions. I am committed to taking every step possible to ensure that this never happens again, and to make amends to those who have been negatively impacted."

"Due to recent events, I have decided to take a leave from Team Jacobs," Fry said. "As hard as this is, I need to focus my full energy on my growth and self-improvement as this goes beyond last weekend's events. I wish the team nothing but success while they compete in my absence.

"There is no confirmed time for my return, but I am extremely committed to doing everything possible to rebound."

Team Jacobs issued its own statement later in the day.

"We support Ryan’s decision to take the necessary time right now to focus on himself — this is more important than sport. Our focus is what is best for Ryan personally as he is not just our teammate, but also one of our good friends. We believe how Ryan is handling everything is a true reflection of his character.

"We will miss Ryan not being on the ice with us for at least the next two upcoming events, but we will be in communication with him throughout this time, supporting him personally and we will take it one day at a time."

The Sault Ste. Marie, Ont.-based team said it will announce its lineup for the upcoming Canada Cup and Grand Slam events in the coming days.

Wade Thurber, the manager at the Red Deer Curling Centre, said that bar staff had to cut off Fry, Koe, Schille and Kidby before their game on Saturday afternoon. He added that with Koe sitting out, Schille and Kidby tried their best to control Fry, but to no avail.

"He just got past that point of being able to tell him anything," Thurber said earlier in the week. "There was some damage in the locker room and some broombags kicked around. It was just conduct that was unacceptable."

Fry, a Winnipeg native, reached out to the club to apologize and offered to pay for any damage. In his statement, he thanked his family, Team Jacobs, and others for their support, adding he would be making a donation to the Red Deer Curling Centre's junior curling program.

The World Curling Tour said Wednesday that it had completed its investigation into the matter. In a statement, the WCT said Koe was intoxicated to a degree where he was unable to play one of the games, while Schille and Kidby were found to be involved in trying to keep the situation under control rather than causing an additional nuisance.

"Ryan Fry's behaviour, however, was the reason for the team's dismissal from the event, both on the ice resulting in broken brooms, as well as actions in the clubhouse where his behaviour was deemed inappropriate leading to the team being asked to not return," the statement said. "As a result of these actions, Fry will be issued a $1,000 fine, which will be directed to Red Deer Junior Curling."

Thurber said it was the first time in the competition's 20-year history that had a team had been kicked out. The $35,000 event is a level below the top-flight Grand Slams but the field still included a few big names in addition to up-and-coming players and regional competitors.

"While we don't condone the events that took place in Red Deer, we are very supportive of Ryan Fry and his decision to step away from curling for the time being to focus on getting better," Curling Canada said on Twitter.

Team Jacobs, which holds the No. 4 position in the men's world rankings, won a Grand Slam title earlier this month in Thunder Bay, Ont.