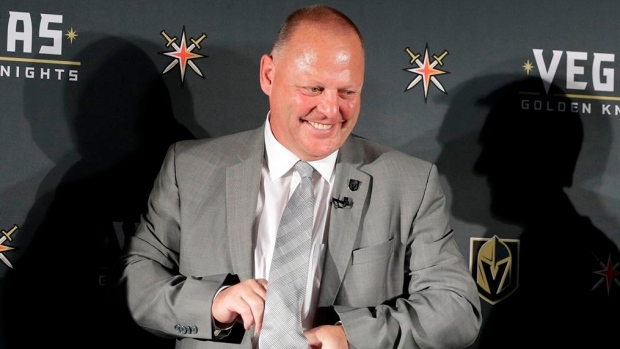 "For that clown to say that in the paper yesterday is not right," Gallant said Tuesday.

Vegas coach Gerard Gallant in response to Sharks coach Pete DeBoer saying he chirps players: “For that clown to say that in the paper yesterday is not right.” Here’s his whole response: #VegasBorn pic.twitter.com/MwWekG6Rv4

Gallant says he was not talking to any Sharks players in reference to the two incidents that happened in the previous game.

"Logan Couture, I thought it was an embellishment, so I'm yelling at the referee. Not Logan Couture," says Gallant.

"The other one, Game 2, Evander Kane, he's yelling at Ryan Reaves between the bench, adds Gallant. "Evander yells at me, he says, 'Hey coach, when are you gonna send your big guy out on the ice and play him more than four minutes?' I said, He's played 10 minutes every game and he's going to play a lot more."

"If I'm going to be a chirper and a loudmouth...I think people know me as a coach and respect me as a coach," says Gallant. "If he's going to yap about that, that's a little unclassy for me."

This is another instance of the drama between the two teams in this first-round playoff series. Kane and Reaves have fought on the ice and chirped each other off of it. San Jose's Joe Thornton was also suspended one game for a hit to the head on Golden Knights forward Tomas Nosek.

The series is tied 3-3 with Game 7 tonight at the SAP Center in San Jose.