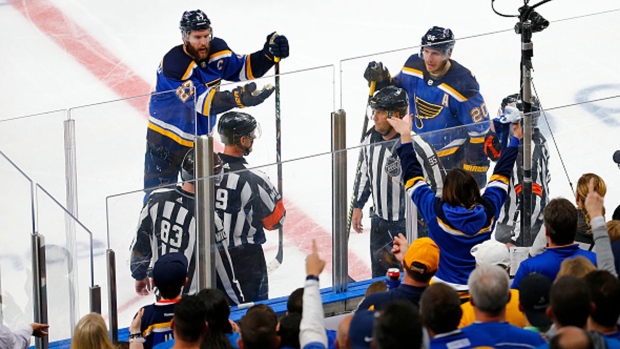 Publicly, the National Hockey League has remained calm. But with the way the 2018-19 postseason has played out, there surely must be concerns about the state of officiating and the way it is affecting the outcome of games.

There have been concerns with officiating performance for years – more on that in a moment – but it has certainly come to a head over the last month, with a number of games being decided by bad or missed calls. The most prominent example remains the five-minute major doled out to Cody Eakin of the Vegas Golden Knights in Round 1, which effectively decided the outcome of an entire series.

But that one awful call – a call the NHL apologized for – hardly tells the whole story. There have been critical missed calls in other games, too. Boston defenceman Charlie McAvoy didn’t receive a match penalty for an obvious head shot that he was later suspended for (not that it helped Columbus any). The most recent example came Wednesday night, where an obvious hand pass in the offensive zone was missed, leading to a San Jose overtime winner.

These are critical calls in high-leverage spots. In a sport where goal scoring is already hard to come by, a handful of bad calls in a game can emphatically change the outcome of a game and a series.

At this point, there is ample debate within the hockey media and fan bases about how to fix the problem. I do believe that the NHL has plenty of talent within the officiating ranks (it’s hard to imagine that there is a pool of untapped talent hidden around the world). The issue is more that, even with this type of talent calling games, the error rates appear incredibly high. The issue has reached a legitimate breaking point in these playoffs.

There are plenty of qualitative debates about what the league should or shouldn’t consider this summer. The most popular tend to concern the expansion of video review and the movement of an official upstairs. Both have pros and cons. The one aspect I haven’t seen a solution for is how to fix the human behavioural issues that have long existed within officiating ranks.

Plenty of research exists on this front, but the long and short of it is that officiating teams don’t call games; they manage them. Michael Lopez’s seminal research clearly exhibited what he called “biased impartiality,” or an officiating team’s attempt at being perceived as fair above all else. Phil Birnbaum’s research showed similar results. This is critical, because it’s the one data point we have that suggests referees have more of an interest in balancing calls than getting the calls right. That is a foundational failure, and until it is fixed, you will always have quality criticisms.

The best way to show this, simplistically speaking, is to show how actual referees behaved against simulated referees. Randomly sampling half of the 2018-19 season shows that the average game included about 7.4 penalties, with a standard deviation of 3.1. If we merely flipped coins to assess penalties knowing how many would be called, we would expect to see a fairly flat and predictable distribution of penalty allocation. When we measure it against what referees actually called, you can see that they are greatly interested in ‘game management.’ 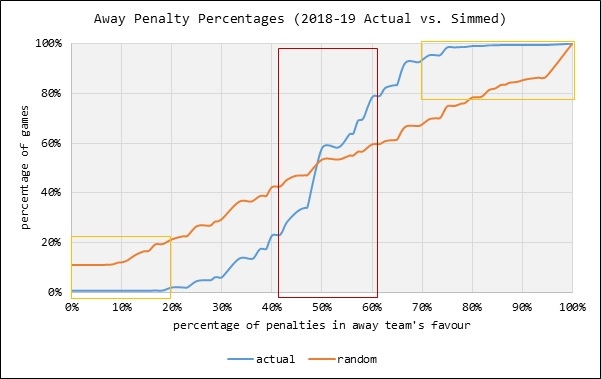 Simulating every one of these randomly sampled games would show sporadic allocation of penalties. That means you have some games where one team doesn’t see a single power play, another game where they see all of the power plays, and a fairly linear trend between the two.

In reality, this never happens. The data shows three things: officiating teams almost never call a game where a team has none of the penalties or all of the penalties, which seems almost impossible. Consequently, you can guess what happens in the middle. Nearly 60 per cent of games saw an even or close to even split in penalties called, regardless of how many minors or majors were observed over the course of the game.

Combine this with Lopez’s research, which shows that teams called for multiple infractions in a row are much more likely than not to draw a penalty in the future, and you can certainly conclude that ‘game management’ is at the heart of everything officiating teams work for. The only conclusion left is that the evening up of all penalty calls is the goal of officiating teams, and that’s a problem.

Recommendations to fix video review and move officials are worthy discussions to have, and almost certainly will happen this summer with the 31 general managers. But until we fix the ‘game management’ issue that exists in the NHL, I’m not sure it’s going to matter.