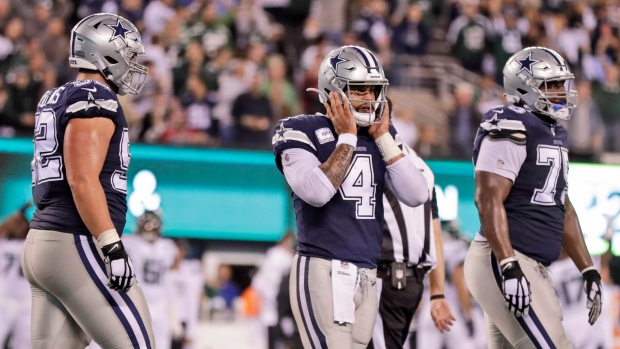 The first half of the 2019 NFL season is almost in the books.

Heading into Week 7, we have a big enough sample size to project what to expect from the majority of the league’s 32 teams the rest of the way.

A lot can change over the final 11 weeks.

Still, it’s safe to say that the Miami Dolphins, Cincinnati Bengals and Washington Redskins won’t be competing for playoff spots in December.

Some numbers stand out more than others at this point in the season.

Here is a look at seven stats worth monitoring heading into Week 7.

9 – Games Decided By One Or Fewer Points

For only the fourth time in the Super Bowl era, nine games were decided by one point or fewer throughout the first six weeks.

The Detroit Lions and Arizona Cardinals have been involved in three of them.

In Week 1, Arizona’s rookie quarterback Kyler Murray led an 18-point comeback to salvage a 27-27 tie with the Lions.

Then in Week 6, Murray delivered his best performance as a pro in a 34-33 win over the Atlanta Falcons.

The rookie first-overall pick has thrown for 1,664 yards and seven touchdowns while completing 64.3 per cent of his pass attempts.

In Week 7, Murray will go head-to-head with Daniel Jones in a matchup of the top two quarterbacks from the 2019 NFL Draft.

Meanwhile, Detroit fell just short on the road once again in Week 6.

This time it was in a 23-22 loss to the rival Green Bay Packers on Monday Night Football.

While the officiating in that game was atrocious, the Lions certainly didn’t do themselves any favours by settling for five field goals in a one-point loss.

Meanwhile, the Dolphins improved their odds of securing the first-overall pick in the 2019 NFL Draft with a failed two-point conversion at the end of a 17-16 loss to the Redskins.

Nobody questioned head coach Brian Flores’ decision to go for two when he had a chance to tie the game with an extra point.

The numbers illustrate how competitive the NFL has been through the first six weeks of the regular season – even if the Dolphins tank is legitimate.

Just in case you missed it, Matt Ryan leads the NFL with 15 touchdown passes.

The four-time Pro Bowl quarterback is one of three passers in NFL history to throw for at least 300 yards in each of his team’s first six games to start a season.

Still, the Atlanta Falcons are just 1-5 heading into Week 7.

It’s no secret the Falcons defence is terrible.

All things considered, it’s somewhat shocking just how bad this unit has been.

In last week’s loss to the Arizona Cardinals, Murray torched Atlanta for 340 yards and three touchdowns.

Atlanta is also tied with Miami for the fewest sacks in the NFL (5).

Their next four games are against the Los Angeles Rams, Seattle Seahawks, New Orleans Saints and Carolina Panthers.

Eventually, something has to give.

It seems like only a matter of time before the hammer falls in Atlanta.

Seattle Seahawks quarterback Russell Wilson has posted a passer rating over 100 in six straight games to open the season.

After leading Seattle to a thrilling 32-28 win over the Cleveland Browns to improve to 5-1, the sportsbooks finally adjusted and made Wilson the sports betting favourite to win MVP at 2/1 odds.

Wilson has thrown for 1,704 yards and 14 touchdowns with zero interceptions.

But plenty can happen over the final 11 weeks of the season.

Right now, there is no doubt Wilson is the MVP favourite.

Add Los Angeles Chargers running back Melvin Gordon to the list of examples in the case against using a first round pick on a running back.

After holding out throughout training camp, the preseason and the first few weeks of the regular season, Gordon has averaged a whopping 2.5 yards per carry and 24.5 yards per game in back-to-back losses to the Denver Broncos and Pittsburgh Steelers.

At 2-4, the Chargers will visit the Tennessee Titans and Chicago Bears the next two weeks.

It’s hard to imagine Gordon getting his season on track on the road against two of the better run-stopping units in the NFL.

Tampa Bay Buccaneers quarterback Jameis Winston is coming off the worst performance of his career after throwing five interceptions in a 37-26 loss to Carolina.

He’s the first player to commit six turnovers in a game since 2016.

The Buccaneers’ biggest issue at this point is that they don’t already have a replacement in place at the quarterback position.

Veteran Ryan Griffin is the backup.

The Titans benched Marcus Mariota in favour of Ryan Tannehill in a 16-0 loss to the Denver Broncos.

A lot will be made about the struggles of the top two quarterbacks taken in the 2015 NFL Draft leading up to that matchup.

Mariota will likely watch that game from the sidelines.

Winston won’t, but that’s probably only by default at this point.

It’s easy to put the blame for a 24-22 loss to the New York Jets on the shoulders of Dallas Cowboys quarterback Dak Prescott.

After all, Dallas has dropped three in a row since starting 3-0.

Prescott has been held to under 300 passing yards with two touchdowns and four interceptions in those three losses.

However, it’s hard to expect much more from the fourth-year quarterback with 60 per cent of his supporting cast either playing hurt or sidelined because of injuries.

Amari Cooper didn’t make it through the game because of ankle and quadriceps injuries.

Fellow wide receiver Michael Gallup fought through a knee injury that was supposed to keep him out for much longer than the two games he missed.

Meanwhile, five-time Pro Bowl guard Zack Martin is dealing with a back injury that has limited him in practice this week.

Those are the injuries we know about.

With Smith, Collins, Martin, Cooper, Cobb and Gallup all either sidelined or playing hurt, we can at least understand why the Cowboys offence has struggled in losses to the Saints, Packers and Jets.

Next up for Dallas – a showdown with the NFC East rival Philadelphia Eagles.

All eyes will be on Dak in prime time on Sunday Night Football.

The Cowboys will be in tough once again as they continue to try to manoeuvre their way through injuries.

The Saints are 4-0 in Teddy Bridgewater’s starts this season.

Bridgewater has proven he is more than capable of filling in for the injured Drew Brees.

However, it seems obvious that the New Orleans defence has been the key to their success with Brees sidelined.

The Saints limited Gardner Minshew and the Jacksonville Jaguars to a pair of field goals in last week’s 13-6 win.

New Orleans has held its last three opponents to an average of 13.3 points per game.

Meanwhile, the Saints offence has averaged just 17.0 points per game since Brees was sidelined with a thumb injury – the 25th-best mark in the NFL over that span.

For perspective, New Orleans ranked third in the NFL with an average of 31.5 points per game with a healthy Brees last season.

Bridgewater deserves a ton of credit for helping guide the Saints to four straight wins.

Because of him, New Orleans will be a legitimate Super Bowl contender once Brees returns.