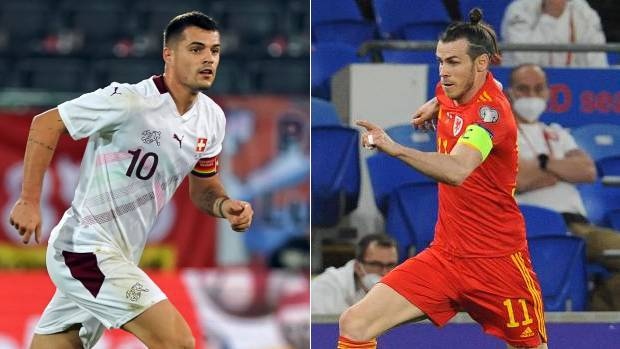 Two teams that made the knockout stage at Euro 2016 begin play in the 2020 European Championship on Saturday as Gareth Bale leads Wales against Granit Xhaka and Switzerland at Baku Olympic Stadium in Azerbaijan, in the second Group A game.

Coverage begins on Saturday morning on TSN1/3 at 8:30am et/5:30am pt. You can also watch the game on TSN.ca, the TSN app and TSN Direct.

Wales had their most successful international tournament at the last Euros, winning their group and advancing to the semifinals before bowing out at the hands of the eventual champions from Portugal.

Switzerland, meanwhile, has seen the Round of 16 at both the most recent European Championship and the 2018 World Cup, though they lost on penalties to Poland in France and were bounced by Sweden in Russia.

While Wales and Switzerland have never met at the Euros, they have been grouped together in qualifying for both Euro 2000 and Euro 2012.

They have played head-to-head seven times overall, with Switzerland holding a 5-2-0 advantage.

Robert Page, who took over for Ryan Giggs as Wales manager in April, knows that his team has to get off the mark against Switzerland if they are going to have success in round-robin play.

For his part, Switzerland manager Vladimir Petković believes his team is prepared to take on anyone they’ll face at Euro 2020 – in the Group stage and beyond.

“The team has become self-aware, optimistic and, yes, definitely realistic,” Petković told UEFA.com. “We know what we can do, what we want and how far we can go, but always with the aim of getting as much as we can, so not limiting ourselves to one opponent, not limiting ourselves to one match or another, but always wanting to improve, always wanting to win against every opponent. We respect our opponents, that's very important, but we're not scared of anyone.”

Aaron Ramsey missed training for Wales on Thursday, but he says it was a decision to keep him off the field and not an injury that could see him miss their tournament opener.

"It was planned that I stayed off my feet," Ramsey told the media. "It was a very light session for the boys. I'm all good and looking forward to Saturday."

The 30-year-old midfielder has only played in 19 of the 44 games Wales has played since their run to the semifinals in 2016.

“It’s been quite a challenging time over the last couple of seasons, but I’ve got my own team around me who are focused on me getting into the best possible shape,” he said.

Italy defeated Turkey 3-0 in the Group A opening match on Friday.