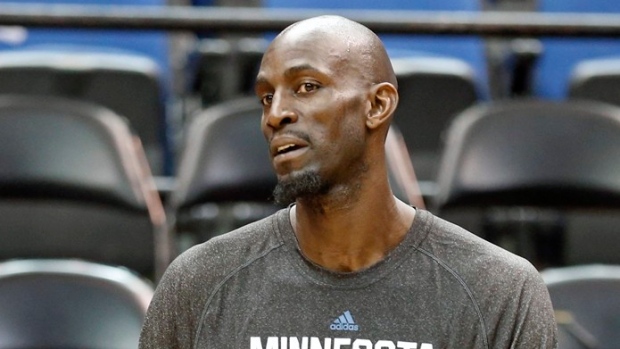 MINNEAPOLIS - Kevin Garnett never wanted to leave Minnesota when the Timberwolves traded him to Boston nearly eight years ago, never wanted to jump from a sinking Celtics ship before Paul Pierce convinced him to follow him to Brooklyn two years ago.

And he sure didn't feel great about uprooting his family in the middle of a season when the prospects first arose to return to his beloved 'Sota last week.

Sitting at his Malibu home over the All-Star break, the only true superstar in Wolves history thought long and hard about what that move would mean. He thought about mentoring Ricky Rubio and Andrew Wiggins.

He thought about going back to the state where he was drafted and where he met his wife, setting down roots and one day following stars such as Michael Jordan and Magic Johnson into ownership. He thought about restoring a relationship with a franchise that was tattered when he was traded.

He was born in South Carolina, became a high school sensation in the Chicago area and a champion in Boston.

But for him, Minnesota will always be home. And in the end, that lure and the possibility of a much greater role down the road proved too great to resist.

"It's perfect," Garnett said on Tuesday at a re-introductory news conference that came five days after he was acquired from Brooklyn in a trade. "If you have a story, this is a fairy tale. This is a perfect ending to it. This is how you want to do it."

For Garnett, it actually may be the beginning.

He made the jump straight from Farragut Academy to the NBA in 1995, a groundbreaking move at the time that ushered in a new era and ultimately compelled the league to change its rules to require players to be out of high school for at least one year before being eligible to be drafted.

He spent 12 years in Minnesota, growing from a skinny, 19-year-old rookie into a two-way force and one of the best power forwards in league history.

He made 10 All-Star teams, was the MVP in 2004 and led the Wolves to the only eight playoff appearances in franchise history, including a stirring run to the Western Conference finals in his MVP season.

"He's our history. He's it. He is the face of the franchise," said Sam Mitchell, a former teammate and now an assistant coach on the team.

"So to bring him back and these guys get to experience and be around him and learn from him and say, 'I spent time with Kevin Garnett' it's going to enhance their growth by leaps and bounds."

The Wolves fell on hard times after losing to the Lakers in 2004 and former GM Kevin McHale and Glen Taylor, who still owns the team, decided to trade Garnett and start a massive rebuilding project in 2007. Garnett saw it as the organization turning its back on him, and relationships were frayed.

"He's the most loyal human being alive," Clippers coach Doc Rivers said. "He's going home. It's where started and it's where he's going to end. It says a lot about him."

He maintained a home here, but really only kept in close contact with Flip Saunders, his coach for 10 years who returned before last season as president of basketball operations.

"I obviously won't forget certain things, but it's time to move on from certain things," Garnett said on Tuesday, adding that his relationship with McHale, who now coaches the Houston Rockets, has improved over the years.

He said he "always had an understanding" with Taylor.

"I wouldn't have come back if the relationship was to the point where it's not ... reachable or something like that," Garnett said.

"I would not have come back if it wasn't a chance that I can refurbish it or it was going to get better. I'm looking forward to this opportunity, and I'm embracing this change."

Coming back not only gives the 38-year-old a chance to wear the No. 21 again and play for another year or two. But it also appears to be the first step toward putting a group together to buy the Wolves from Taylor.

"I wasn't really happy in how I left here. My goal since I've been in the league was to win a championship and I wanted it to be here in the Twin Cities," Garnett said.

"I've always wanted that. I wanted to be a part of that the first time this franchise went over the hump and I got a taste of that in the Western Conference (finals). I've been thirsty ever since. Once you get that taste, you never lose that."

For now, he's still a player. And one Saunders believes can make a lasting impact, even if his MVP days are behind him.

Garnett practiced with the Timberwolves for the first time on Tuesday, and he wasted little time making his presence felt in front of his new teammates.

He surprised the 19-year-old Wiggins by getting to the gym at 9:30 a.m., then barked at big man Nikola Pekovic during practice to set an early tone of intensity.

"He yelled at Pek twice already when I think nobody in his career yell at him to run back on defence, so that's good," Rubio said. "Everybody listens and everybody respect him. He's doing everything it takes to get better."

Mitchell was that player for Garnett back in 1995. Twenty years later, it's KG's turn.

"I know these are the declining days of my playing days, but I think I have so much more to bring. This is the perfect situation," Garnett said. "This is full circle right here."