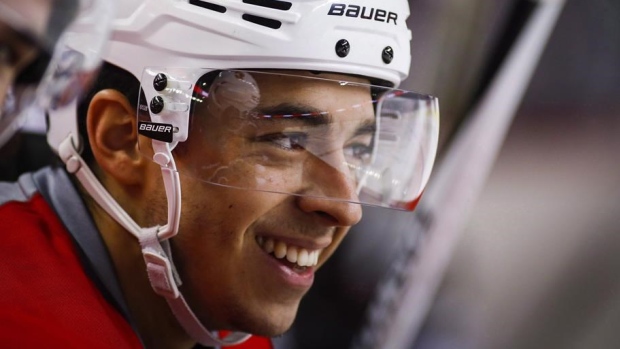 Johnny Gaudreau cause a small stir last week when he told Philadelphia’s 94.1 WIP 'it would be sweet' to be play for his hometown Flyers.

Gaudreau was born an Salem, New Jersey, which is roughly an hour's drive to Philadelphia. He clarified on Wednesday he has no plans to leave the Flames anytime soon, but believes all players would like to play close to home.

"Yeah, the way the question was asked I said, 'It would be sweet to play in your hometown,'" Gaudreau told the Courier-Post of the interview. "I think if you ask any player in the NHL if they’d like to play in their hometown at some point they’d all say it would be pretty sweet. You’ve got friends, you’ve got family, you’ve got kids you went to school with, you’ve got teachers, you name it. You’ve got people that will be supporting you. The people support me down here, like it’s crazy down here.

"I’m just really fortunate they follow me up in Calgary. I love Calgary, don’t (get) me wrong. It’s a great city and they’re so passionate about our team. It’s a real hockey city. I really enjoy it up there, don’t get me wrong, but I think if you ask any player if he wants to play in his hometown they’d say it would be pretty cool to do that. I’ve still got five more years on my contract and who knows…if we’re playing well up here in Calgary I could end up staying another four or five years there because I love the city so much. It’s tough to have all those articles come out when it’s something so small, but that’s the way it goes sometimes."

Gaudreau signed a six-year, $40.5 million extension with the Flames last October and has spent his entire professional career in Calgary. He scored 18 goals and added 43 assists in 72 games last season - a slight dip in production after scoring 24  goals as a rookie and 30 in 2015-16.

He had two assists as the Flames were swept in the first round of the playoffs by the Anaheim Ducks. Guadreau praised the Flames ability to overcome a slow start to make the playoffs and added he believes the team's future remains bright with their off-season additions.

"Probably the resiliency of our team," Gaudreau said when asked what his biggest takeaway from the 2016-17 campaign was. "We had a tough start this season. I think we were like 5-10. Coming around Thanksgiving we were out of a playoff spot. The statistics of when you’re out of a playoff position at Thanksgiving is really high (to miss the playoffs). It’s difficult to fight your way into a playoff spot, but our team did it. We had a great second half of the season and we played some good hockey in the playoffs. Unfortunately we got swept, but I think we could have won a game or two there and the series could have been a little different. It’s a learning experience for us."

"We have a really young team, a lot of good, young leaders on our team and some older leaders that us young guys get to learn from. We’re pretty fortunate with the group we have in Calgary. We had some pretty big signings this offseason. I’m really looking forward to next season, too."