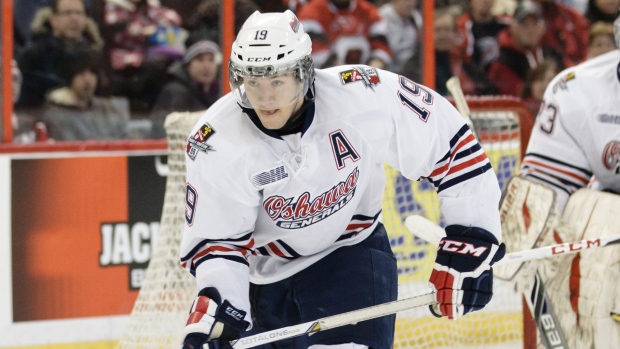 The Otters captain, and projected No. 1 pick in this year's NHL draft, had a goal and three assists on Wednesday as Erie dropped a 6-5 overtime decision to the Oshawa Generals to fall behind 3-1 in the best-of-seven Ontario Hockey League final.

Oshawa can close out the series with a win on home ice on Friday.

"I look forward to coming back to (Erie) on Sunday (for Game 6)," McDavid said.

"Obviously it's upsetting, but we're not out until we're out," he added. "Everyone still believes in this group."

Cole Cassels scored a power-play goal off a Matt Mistele rebound 8:19 into overtime to bring the Generals within a win of their first league championship since 1990.

The sequence began with an untimely delay of game penalty against Mason Marchment, who flipped the puck over the glass and into the crowd while trying to clear the puck out of the Otters' zone. Erie killed off all but 10 seconds of the man advantage, until Cassels, who also had two assists, flipped a shot past goaltender Devin Williams to end the game.

"Misty just threw one far pad and it was able to bounce out to me," Cassels said. "I was lucky enough to put it the back of the net."

Mistele also had two goals in regulation for Oshawa, which squandered a pair of two-goal leads and trailed 5-4 late in the second period. Josh Brown, Stephen Desrocher and Mitchell Vande Sompel also scored.

Nicholas Baptiste, Dylan Strome and Darren Raddysh had a goal and a helper apiece for the Otters while Jake Marchment rounded out the attack.

Erie overcame an early 2-0 deficit with power-play goals from Baptiste and Strome 33 seconds apart late in the first period. The Otters entered the game 1 for 9 with the man advantage in the series.

Jake Marchment scored with 7:38 left in the period, 10 seconds after Desrocher's shot from the blue-line gave the Generals a 4-2 lead. Raddysh's long-range shot less than two minutes later evened the score at 4-4.

McDavid's wrist shot from out front beat Generals goaltender Ken Appleby with 2:16 left in the period to hand the Otters their first lead of the night. McDavid now has 21 goals and 49 points in the playoffs, two points shy of the OHL record of 51 shared by Jason Dawe (1993) and Justin Papineau (1999).

The Otters appeared to be headed to the third with a one-goal lead, until Brown knocked in a rebound with six-tenths of a second left to tie the game and cap a wild period that featured six goals on 19 shots.

"The character in our room is tremendous," Cassels said. "Everyone wants to win here."

Appleby made 27 saves. Williams stopped 23 shots in the losing effort.