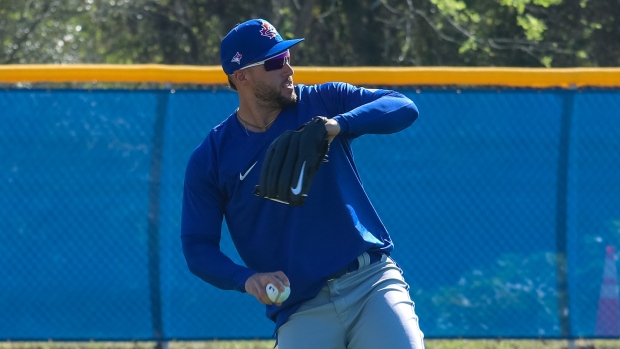 TORONTO — A new-look outfield is going to pose some challenges for Toronto Blue Jays manager Charlie Montoyo in the early going.

The club is viewing it as a great problem to have at this point.

With George Springer now manning centre field and Lourdes Gurriel Jr. in line for an everyday role in left, it comes down to fitting Teoscar Hernandez and Randal Grichuk into the lineup on a daily basis, while also using the DH spot to find at-bats for Rowdy Tellez, Vladimir Guerrero Jr. and potentially Alejandro Kirk.

After spending 2020 as the starting centre fielder, Grichuk is the one who should be bracing for a diminished role in the early going, something he seems to be accepting … for now.

“We’ve got four guys that need to play every day,” Grichuk said Saturday, ahead of Sunday’s Grapefruit League opener in Tampa against the New York Yankees. “Obviously, that DH spot isn’t going to be available every day, so there’s going to be somebody that’s not playing every day. I would imagine it’s going to be performance-based, it’s going to be key, and then, I guess, just moving guys around.”

With the Jays’ front office targeting Springer out of the chute when free agency started, Grichuk had to sit and watch from afar as they tried to upgrade his position.

They eventually did in January with the best guy on the market, and then attempted to land another everyday outfielder in Michael Brantley, as well.

“It didn’t upset me,” Grichuk said. “I’m a professional so I’m going to handle it professionally and understand if they thought centre field was their major priority where they needed help, so be it. I think I played a lot better last year than a lot of people think if you look at the numbers, but I think right field is my best position anyway.

“We did get better (as a team) and, obviously, playing-wise we’ll kind of see what happens when April 1 rolls around on playing time.

“When we thought we signed Brantley, everybody kind of thought they were going to get traded,” Grichuk added. “I know I was talking to Teo and Gurriel a little bit this off-season and it was kind of crazy. … You always have it in the back of your head that if you’re going after outfielders, and understanding who we have here in the moment, there might have to be some moves made.”

Handing Grichuk a five-year, $52-million extension in April of 2019 was a head-scratcher at the time, and that deal has three seasons and $28 million remaining.

While Grichuk did some good things at the plate in 2020, specifically dropping his strikeout rate by five percentage points to a reasonable 21.2 per cent in 52 games and posting a slightly above average 109 wRC+, he remains a notoriously streaky hitter, something he’s trying to even out.
In the field, the numbers haven’t been kind to him the last two years, either, as he posted a minus-8 Defensive Runs Saved mark in centre last year, which came on the heels of a minus-9 DRS performance in right field in 2019.

Heading into his age-29 campaign, Grichuk is now balancing the desire to play for a contender and wanting an everyday role while still in his twenties.

“I’d like to say a little bit of both,” Grichuk said of what he values at this point in his career. “I think winning should be everyone’s normal, first and foremost goal, but seeing who I was in the big leagues from 2014 through ’19, I think I was a different player last year and I’m still making strides with my mechanics, with my approach, building off of last year and I’m really excited and interested to see what I can do in a 162-game season playing every day with the mindset, swing and approach that I had last year.”

While Grichuk’s contract makes him tough to trade without eating a significant chunk of money, Gurriel is in the exact opposite position.

That has teams asking about him all the time in trade talks, and his contract only makes him even more valuable.

The Cuban sure heard the rumours this winter.

“To be honest with you, it was complicated,” Gurriel said Saturday through team translator Tito Lebron. “A lot people calling me, asking about those trade rumours. It wasn’t easy. But in the off-season I concentrated on myself, went out there and prepared myself very well to play baseball and that’s what I love to do. I’m here right now in camp and I’m ready.”
Gurriel is as big of a bargain as there is on the Jays’ roster.

He’s owned just $3.5 million in 2021, followed by $4.5 million in 2022 and $5.4 million in 2023.
But it doesn’t end there. He’s also under team control for 2024 as an arbitration year.
When you combine the offensive production with significant strides made on defence and then factor in the price tag, LGJ is a very valuable commodity.

“When it comes to Gurriel, I told him, ‘That’s just a compliment. You’re a good player and people want you. That’s how you’ve gotta take it,’” Montoyo said.

After adding a ton of muscle to his frame last off-season, Gurriel again hit the gym hard this winter, adding about eight pounds to show up to camp at around 215.

While he’s the everyday option in left, he could also see some time at first base this season.
He’s also been taking ground balls at third base, but that one isn’t a real option, just an emergency plan.

Personally, though, Gurriel would prefer to focus on becoming the best outfielder he can be after taking some time initially to get used to the transition from the middle infield.

“I have the ability to come back to the infield again, I have no doubts of myself on that,” Gurriel said. “But I’m not going to lie, the transition’s going to be a little bit hard. It’s kind of like before, from the infield to the outfield, it took me basically two years for that. But the desire’s there and if I have to play some first and third, either one, and the team needs me there, then I’ll do the best I can.”

The mostly likely scenario if all four outfielders are running hot at times this season is to use Hernandez as the DH, which would allow Montoyo to put his best defensive outfield on the field.

“I think it will take care of itself,” Montoyo said. “It’s 162 games and it will happen, that’s how it goes from experience. That’s the good thing about having the DH spot, too, because hopefully they’re all hot and it’s tough to see who’s not playing. That would be the best case scenario.”

Gurriel definitely sees the depth to the lineup and inside the Jays’ clubhouse this spring, everyone is expecting to score a whole lot of runs this season.