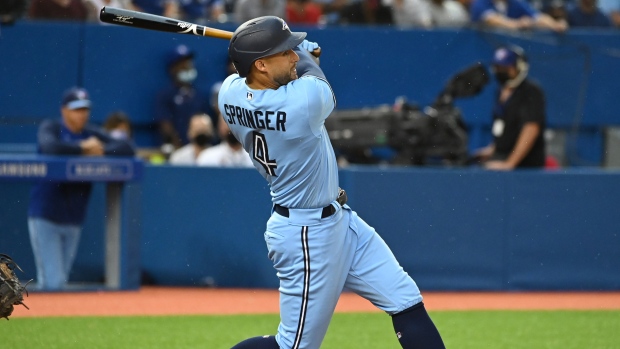 Your players of the week pres. by @Chevrolet. pic.twitter.com/3fS28U6JZy

Springer has been remarkable since July 26, hitting .400 with three home runs and seven runs batted in over the span of seven games.

His play helped propel the Blue Jays to a 5-2 record during that stretch as Toronto looks to make a mid-summer push for the playoffs.

This is the third time in his eight-year career that Springer has been named AL Player of the Week, with the other honours coming in 2017 and 2019 as a member of the Houston Astros.

He is the second Blue Jays' player to win the award this season after Vladimir Guerrero Jr. was named Player of the Week on June 28.

Meanwhile, Canadian first baseman Joey Votto of the Cincinnati Reds, after being named National League Player of the Month for July, was named NL Player of the Week as well.

The Toronto native earned the award thanks to his .375 batting average and seven home runs last week. ​