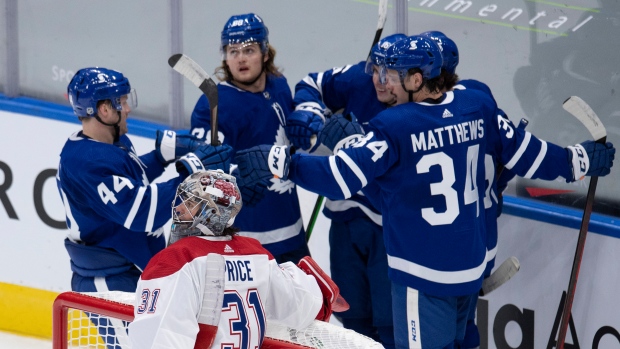 The Montreal Canadiens made a significant change behind the bench on Wednesday, removing Claude Julien from his duties as head coach and installing Dominique Ducharme on an interim basis.

The move comes one day after the Canadiens dropped a 5-4 game to the Ottawa Senators, their third loss in four shots against the cellar dwellers of the North Division so far this season.

You can’t help but wonder if, in some capacity anyway, the losses to Ottawa were the proverbial nail in Julien’s coffin. The Senators not only outscored the Canadiens 12-10 in the process, but they also outshot them 246-245 in the process, indicative of competitive play.

There are certainly other contributing factors to why Julien is out beyond a few disappointing loses to a divisional rival. You get the sense that general manager Marc Bergevin has had increasingly higher expectations for his lineup post-rebuild than what he’s received. The team’s lone playoff appearance in a full season coached by Julien came last year, and that required winning a qualifying round against the Pittsburgh Penguins courtesy of the expanded postseason.

It’s also not lost on me that Montreal’s special teams have been nightmarish under Julien. Over his tenure, the team was 24th in rate scoring on the power play and 26th in rate scoring against on the penalty kill.

There will be a furious debate about whether or not Julien deserved to be fired. The team has unquestionably struggled during stretches of his tenure, but most of his tenure was also collinear with a lengthy rebuild spearheaded by Bergevin.

One other complicating factor? The core organizational piece, goaltender Carey Price, has been unable to recapture the magic of the earlier parts of his career.

After putting together one of the most dominant seasons to date in 2016-17, Price has been below league average in stopping pucks. Adjusting those shots for a shot quality component actually tells a grim story, one that indicates Price is about -25 goals worse than his expected save percentage based on the shot profile faced.

That generously counts the 2016-17 year, when Julien was hired mid-season: 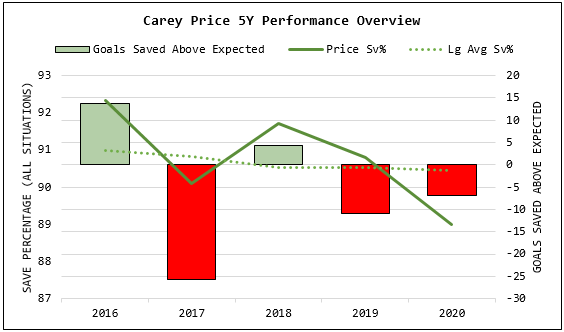 It’s one thing to have a few challenging seasons, but for a star player making $10.5-million per year (and that contract carries through 2025-26), it’s a huge problem – doubly so in a hard-cap league like the NHL, where the team’s massive investment in goaltending came at the cost of investing in other positions proportionally.

There is also the uncomfortable reality that Montreal finally has another credible goaltending option, and it came in the form of off-season addition Jake Allen.

Allen has stopped 93.2 per cent of shots and is about +3.5 goals better than expectations, remarkably strong numbers and miles ahead of where Price is to start the season. Will Allen be able to sustain such lofty numbers? It’s unlikely. But he is coming off of a strong season in St. Louis (92.7 per cent stop rate, +7.0 goals saved above expectations), and is easily the biggest crease competition Price has had in some time.

It is simply impossible to survive as a head coach in a league where your highest-paid player is a goaltender who carries the highest average annual value contract at his position in the league, and your team is getting below-average results.

This is a league that, over and over again, fires coaches – justified or otherwise – when goaltending goes sideways. You don’t have to squint at the page to see Price’s .893 save percentage this season.

Whether or not firing Julien is the right move remains to be seen. Bergevin still appears bullish on his roster, and perhaps a coaching change can spur some improvement in critical areas – goaltending and special teams play chief among them.

But the core issue for Montreal right now concerns their star in net. Has he entered a new and possibly concerning phase of his career, or are we seeing a goaltender adversely impacted by the performance around him?

He was brilliant last postseason, so perhaps there is a chance this turns around. Either way, it’s a big enough issue that it probably requires immediate attention.

The playoff berth this team seemingly had locked up two weeks ago is still achievable, but there’s much less daylight in the North Division now.