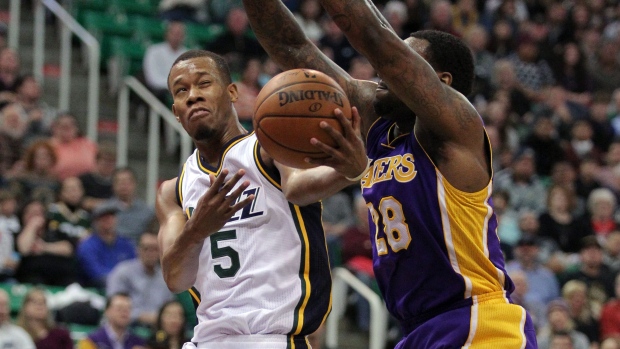 Gobert had 18 points, 18 rebounds and five blocked shots, helping the Utah Jazz cruise to a 109-82 victory over the Los Angeles Lakers on Saturday night.

The 7-foot-1 centre, one of the NBA's top shot blockers, is working his way back to his regular form after missing 18 games with a MCL sprain. The knee was not an issue against lowly Los Angeles, and Gobert's endurance seemed to return.

"I'm feeling better every game," Gobert said. "My teammates are looking for me. I try to stay running to the basket. ... This game I tried to be more aggressive, especially on defensive rebounds.

"The more I touch the ball, the better I feel. If there's some periods I don't touch the ball, I can get a little rusty. ... I just feel better. My legs are stronger. My cardio was better this game, I didn't get really tired. That was a good thing."

The Jazz used a 26-5 spurt in the first quarter, including three baskets by Trey Burke, to run away with the game. The Lakers' last lead came at 7-4.

Gobert recorded his first double-double since returning from his knee injury. The points and rebounds were season highs.

"We did a good job of putting it away early," Burke said.

"I thought we just didn't come out to play," Lakers coach Byron Scott said. "I thought that team, that after losing the last two games and they are in the hunt for that eight spot, and they came out like a desperate team.

"Jamming it up a little bit, pushing off the toe in an explosive manner sometimes does it," Bryant said. "I just tweaked it and couldn't shake it lose tonight."

The Lakers have lost six of seven since a season-high three-game win streak.

"Our players are getting used to playing with (Gobert)," Jazz coach Quin Snyder said. "He's a unique player. You have to play to his strengths.

Lakers: Bryant passed John Stockton for seventh on the NBA career minutes list. ... Larry Nance, Jr. left in the first quarter with a sore right knee. ... The Lakers shot just 34.4 per cent from the field.

Jazz: Trevor Booker (concussion) and Derrick Favours (back) did not play. Favours missed his 13th straight game. The Jazz played stretches with no power forward or with 7-foot Jeff Withey alongside Gobert. ... The Jazz signed 6-7 forward JJ O'Brien to a 10-day contract. ... The Jazz scored at least 28 points in the first three quarters.

Bryant said Saturday he is removing himself from consideration for a spot on the U.S. team that will compete at the Rio de Janeiro Olympics this summer, meaning the five-time NBA champion's retirement begins officially when his 20th and final season with the Lakers ends.

Bryant also talked about his body not being able to keep up with his mind before the game.

"It's strange," Bryant said. "If I could describe it, it's like you don't have the energy in the legs that you used to have. That's the best way to describe it. It's the energy, it's the explosiveness, it's the continual motor. Those things are always taken for granted. I could run at a high speed and play hard for the entire game. Now I can run all day from a stamina perspective, but the legs don't have the same amount of energy so you find that you're having to figure other things out. That's the thing."

Lakers: Host the Rockets on Sunday.

Jazz: Travel to face the Hornets on Monday.