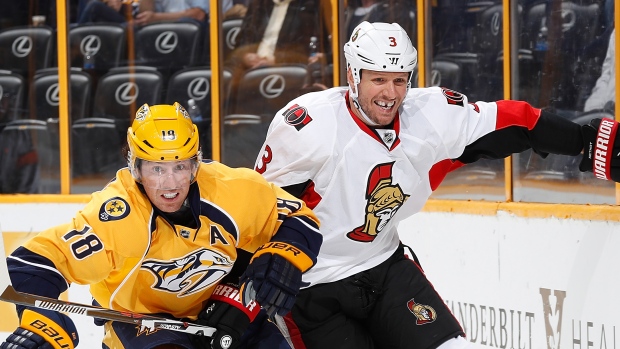 McKenzie notes that Vegas general manager George McPhee could trade Neal quickly or even keep him until the trade deadline when he can be used to acquire prime draft picks as a rental player.

If there's no flip deal for him now, he could yield some prime draft assets for VGK as a trade deadline rental player.

LeBrun says a trade is a possibility for Methot as well.

Hearing that VGK have selected Marc Methot in the expansion draft... whether or not he gets flipped over the next few days...

The Golden Knights will announce their expansion draft "claims" tonight at the NHL awards, but will wait until tomorrow to announce any trades, says McKenzie.

BTW, as I understand, VGK will only announce their expansion draft "claims" from each team today. Trades/flips etc would come tomorrow.

Neal, 29, scored 23 goals and added 18 assists in 70 games during the regular season this year and added six goals and nine points in the team's run to the Stanley Cup Final.

The Predators have reportedly been trying to work on a trade with the Golden Knights that would keep Neal in Nashville, but it appears the two sides have failed to get it done.

Methot, 32, was a top line pairing with Erik Karlsson in the nation's capital this season, his fifth year with the club. The Sens were forced to expose the Ottawa native as defenceman Dion Phaneuf decided not to waive his no-movement clause.

Methot has two-years left on his contract with an average annual value of $4.9 million while Neal is entering the final year of a six-year, $30 million deal.

TSN Hockey Insider Darren Dreger notes that the Winnipeg Jets have a deal in place with the Golden Knights that would see defenceman Toby Enstrom remain a Jet.

Unsure who the Winnipeg Jets are losing in expansion, but I believe the Jets made a deal with VGK to not take veteran Toby Enstrom.

Alexei Emelin of the Montreal Canadiens, Cody Eakin of the Dallas Stars and Brandon Leipsic of the Toronto Maple Leafs are three players who could hear their names called Wednesday night at the expansion draft as well, according to TSN's Hockey Insiders.

The Golden Knights are believed to have already signed Minnesota Wild forward Erik Haula as one their picks, receiving prospect Alex Tuch in the process.