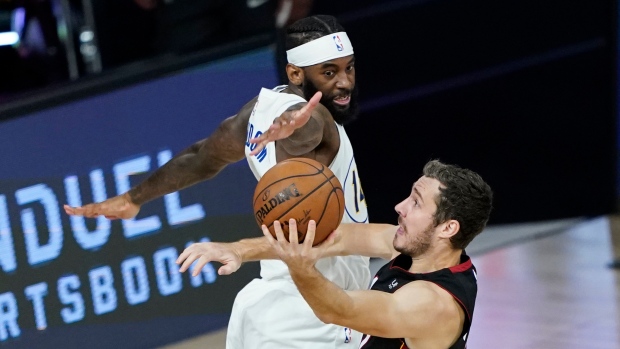 MIAMI — Goran Dragic has repeatedly said that he wants to finish his career in Miami. Meyers Leonard ended last season wanting a second run with the Heat.

As such, their time as free agents didn’t last long.

Dragic and Leonard have both decided to return to the reigning Eastern Conference champions, each telling The Associated Press on Friday evening that they have agreed to accept Miami’s offer of two-year deals to remain with the Heat.

The second year is a team option on both contracts.

Dragic’s deal, when signed, will be worth about $18 million for this season. Leonard agreed to a deal that will pay him around $9 million this season.

“Happy to be back,” Dragic told AP. “That was my plan, to come back, but in this crazy business you never know.”

With Dragic and Leonard back, and with Udonis Haslem announcing last week that he will return for an 18th season — he did that before the Heat could even talk to him, though it is clear that they’ll want the Miami native and three-time champion back for as long as he wants to keep playing — Miami is well on its way to team president Pat Riley’s and coach Erik Spoelstra’s goal of bringing back last season’s team as close to intact as possible.

The Heat won the East as a No. 5 seed last season, Jimmy Butler’s first year in Miami and a year where the team’s young core — All-Star Bam Adebayo, Duncan Robinson, Tyler Herro and Kendrick Nunn — all blossomed at once.

“I wanted nothing more than to come back to Miami. Literally nothing more,” Leonard told AP. “I felt so damn blessed to feel at home right away and feel that way all year long. From top to bottom, Pat to Spo, Jimmy to Bam, Goran to UD and the rest of my teammates, something just felt so right. There’s just no other way to put it.”

Dragic will be entering his seventh season with the Heat and is coming off a year where he averaged 16.2 points while playing off the bench in the regular season. He became a starter again in the playoffs and tore his plantar fascia in Game 1 of the NBA Finals against the Los Angeles Lakers, an injury that hurt Miami’s chances.

The Heat surprised Dragic with billboards in his native Slovenia in recent days, with slogans such as “Your second family is always with you.” That gesture, Dragic said, was deeply moving.

“I was in the car with my wife and her brother and they drove me past those billboards,” Dragic said. “I didn’t know. They told me nothing. They just said, ‘Look to the right.’ And when I saw myself, saw what they said, it really touched my heart. This is my home. I want to stay here in Miami. I appreciate Pat Riley, Andy Elisburg, the whole organization and what they did for me.”

Leonard averaged 6.1 points for the Heat this past season, starting for much of the regular season. He said he had no desire last year to try to put up big numbers in a contract year, deciding instead to simply focus on doing whatever it took for Miami to win games.

He hoped that would be enough for the Heat to want him back. It was.

“It feels good to be wanted, No. 1. But more to me, I am incredibly, incredibly thankful that the Heat appreciates Meyers Leonard as a total package,” said Leonard, who intends to fly from his off-season base in Los Angeles back to Miami shortly. “The human being, the teammate, the player. Everything matters to them and that matters to me. I have found comfort in knowing exactly who I am as a person and as a player and I’ve shown enough people exactly what that is and I’m not changing for anybody.”