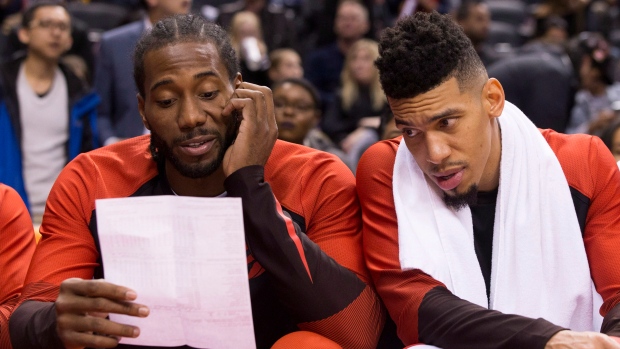 As the Toronto Raptors inch closer to the start of the regular season, it appears Kawhi Leonard’s comfort level with the organization is growing.

According to Danny Green, Leonard is different from his days in San Antonio.

“He’s talking to guys, he’s leading by example, in the huddles he’s chiming in, saying what he feels, saying his opinion. Before he didn’t really show or tell his opinion much… he’s leading vocally more than ever before.”

Head coach Nick Nurse said recently that Leonard has done a great job helping lead the club during training camp and the preseason.

“It’s also a comfort thing maybe. It’s a different system, new identity. He’s older here. There’s a lot of young guys that look up to him and respect him. You’ll have to ask him, he probably has other feelings about it but I would think it’s comfort level and him being [one of] the older vets in here. He’s not that old but he’s a veteran here so he kind of has to lead by example and vocally,” Green added.

Green and Leonard were the last Raptors to leave the court Monday as the pair got in some extra work after practice.

“I’m getting there. I think everybody else is getting there too. Starting to feel out their rhythm, get the chemistry and find their spots,” Green said.

Through two preseason games, Leonard is averaging 14.5 points per game on 45 per cent from the field.

Meanwhile, guard Norman Powell (thigh bruise) was limited to non-contact work in practice Monday but Nurse said he should be a full participant on Tuesday. OG Anunoby (personal) is also back with the club.

It’s been a while since Toronto took on another NBA team – they beat Melbourne United 120-82 over the weekend – and point guard Fred VanVleet joked that the team was ready to get back to playing against familiar opponents.

It's been almost a week since the Raptors last played against another NBA team. After days of scrimmaging vs themselves, VanVleet said he's eager to see another team Wednesday, joked "I think I've taken enough illegal screens from Serge in the last week to last me all season."

“I think I’ve taken enough illegal screens from [Serge Ibaka] in the last week to last me all season,” he said.

Toronto will be back in action Wednesday against the Brooklyn Nets before wrapping up the preseason the following day in New Orleans against the Pelicans.