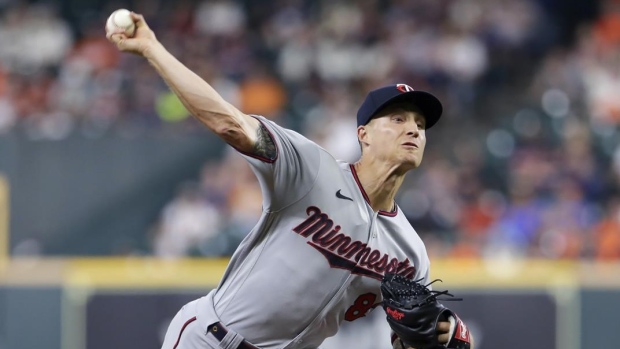 HOUSTON (AP) — Rookie Griffin Jax is making the most of his opportunity to start in the majors, and highlighted his skills Thursday night by stifling one of baseball's toughest lineups.

The Minnesota Twins got a solid start from Jax, and Andrelton Simmons drove in two runs as they built a big lead early and held on for a 5-3 victory over the Houston Astros.

“Everything he wanted to do he did.” Twins manager Rocco Baldelli said. “It didn’t look like the Astros really dialed in on him or felt comfortable in some of those at-bats. It was a heck of an outing in every way. He should be happy with that outing because we really are.”

Jax (2-1) allowed three hits and one run in a career-high 5 1/3 innings for his first career victory as a starter. Jax, who has made just eight appearances and four starts in his career, picked up his first major league win June 25 while pitching in relief.

“I take it as a big challenge going out there knowing I’m going to face the best of the best," he said. “It just builds my confidence knowing I can do it."

Houston trailed by four with one out in the ninth when Michael Brantley legged out a single on a grounder. Yordan Alvarez then belted a home run off Danny Coulombe to the seats in right field to cut it to 5-3.

Coulombe walked Kyle Tucker with two outs and he was replaced by Alex Colomé, who got his fourth save thanks to a nifty catch by Jorge Polanco just behind second base on a ball hit by Martín Maldonado.

Rob Refsnyder and Miguel Sanó hit consecutive singles with one out in the second before Refsnyder scored on a single by Willians Astudillo. Refsnyder was activated from the 10-day injured list before the game after sitting out since June 14 with a hamstring injury.

Trevor Larnach hit a ground-rule double to score Sanó after the hit by Astudillo. A groundout by Simmons sent Astudillo home to extend the lead to 3-0.

Polanco made it 4-0 with an RBI single before Valdez finally got out of the inning by striking out Brent Rooker.

The Astros, who also got a home run from Jason Castro, are tied for the best record in the American League at 65-44 despite losing four of their last five. They fielded an unconventional lineup in this game, with Maldonado, who is normally a catcher, starting at first base for the first time since 2014 in place of Yuli Gurriel, who was out with an injury.

Utility player Aledmys Díaz had filled in for Gurriel in the last two games but played third on Thursday with Robel Garcia moving to shortstop for Carlos Correa, who got the night off for rest.

Jax had allowed just one hit when Castro opened Houston’s sixth with his homer over the short fence in right field to cut the lead to 4-1.

There was one out in the inning when Chas McCormick doubled off the wall in left-center to chase Jax. He was replaced by Caleb Thielbar, who retired Brantley and Alvarez to end the inning.

Manager Dusty Baker credited Jax for his performance, but thought his team was a bit sluggish on Thursday after not getting back to Houston until about 8 a.m. after a night game in Los Angeles on Wednesday.

“He was throwing strikes,” Baker said. “But it seemed like it took us a while to wake up and they got him out of there just in time. He pitched well.”

Valdez settled down after the tough second inning and lasted 6 2/3 innings while permitting six hits and four runs with seven strikeouts.

“They found some holes," Baker said. “They got some breaking balls that they stayed on. He pitched great except for that second inning."

Simmons drove in another run with a bunt single to extend the lead to 5-1 in the eighth.

Twins: DH Josh Donaldson returned after being out of the lineup for the last five games with mild tightness in his right hamstring. ... Utility player Nick Gordon was optioned to Triple-A St. Paul to make room for Refsnyder on the roster.

Astros: Gurriel missed his third straight game with a stiff neck. ... 3B Alex Bregman (strained left quadriceps) will continue his rehabilitation assignment with Triple-A Sugar Land on Friday night. He also is scheduled to play Saturday night could return after those two games.

The Astros observed a moment of silence before Thursday’s game for former pitcher J.R. Richard, who died at 71. The flame-throwing right-hander spent 10 years with the Astros before his career was cut short by a stroke.

Baker, who was friends with Richard for most of his adult life, reminisced on the times he played against him over the years.

“He was the toughest guy I ever faced,” Baker said.