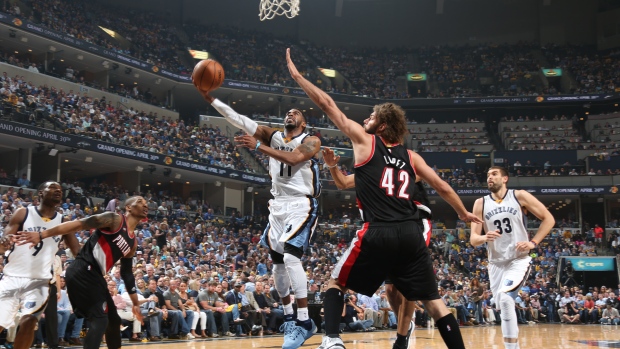 MEMPHIS, Tenn. - Known for pounding opponents inside with Marc Gasol and Zach Randolph, the Memphis Grizzlies are showing they can be just as effective outside the paint.

Hey, they can even shoot 3-pointers.

Mike Conley and Courtney Lee each scored 18 points, and the Grizzlies beat Portland 97-82 Wednesday night to grab the franchise's first 2-0 lead in a playoff series.

The Grizzlies took full advantage of starting the playoffs at home for only the second time in their short post-season history. They had only won their playoff opener once before, and that was on the road in San Antonio in 2011.

"All we did is just take care of home court, which we were supposed to do," Lee said. "We didn't want those guys to come in here and get one and switch home-court advantage in their favour."

Gasol had 15 points, and Randolph and Beno Udrih added 10 apiece.

LaMarcus Aldridge led Portland with 24 points and 14 rebounds, and he also had four blocks with two steals. Damian Lillard added 18 points but the Trail Blazers lost their first two playoff games for the first time since 2011, when they fell in six games to Dallas.

Game 3 in this best-of-seven series is Saturday night in Portland, and the Trail Blazers hope to draw on their fans the way the Grizzlies have.

"We got to try to do something there," Lillard said.

Memphis is known for its bruising inside game with Gasol and Randolph. That duo combined to shoot 9 of 31, not that it mattered with Memphis shooting 50 per cent (8 of 16) outside the arc and 42.7 per cent overall.

Memphis was 22nd in the NBA shooting 3s this season while Portland ranked eighth. But the Grizzlies shot 50.9 per cent against the Trail Blazers sweeping all four games in the season. So the Grizzlies' 3-point accuracy didn't surprise Portland coach Terry Stotts.

"They're good shooters," Stotts said. "They don't look for them a lot. We can't leave them open either."

Portland came into this series with several players banged-up, and the list got longer with centre Chris Kaman out after spraining his left ankle Tuesday in practice. Stotts juggled his lineup, starting guard Allen Crabbe for the first time in the post-season.

The Blazers looked like the team that won 51 games during the regular season early. Crabbe hit a 3 in the opening minutes to give the Blazers their first lead in this series, and they jumped out to a 10-2 lead with Aldridge connecting on four of his first five shots.

Yet even with the Grizzlies shooting so poorly that they missed a handful of layups in the quarter, Portland led only 21-19 at the end of the first.

Memphis took control in the second with a 15-2 run, turning Portland's four-point edge to a 34-25 lead on a 3-pointer by Jeff Green. The Grizzlies outscored Portland 31-18 in the quarter and led 50-39 at halftime.

The Grizzlies simply clamped down tighter and led 73-60 at the end of the third after leading by as much as 18 late in the quarter.

Trail Blazers: Portland's shooting woes continued. Aldridge was 4 of 6 in the opening quarter and went 3 of 14 the rest of the way. Lillard, 5 of 21 overall and 0 of 6 outside the arc in the opener, was 5 of 16 and hit 1 of 5 outside the arc. ... The Trail Blazers turned it over 14 times, which Memphis converted into 16 points.

Grizzlies: Memphis had 29 second-chance points on just 12 rebounds, a franchise record in the playoffs, topping the mark of 26 set in triple-overtime against Oklahoma City in 2011. ... Lee made two 3-pointers, and Memphis now is 23-3 this season when he makes at least two in a game. ... Memphis had six turnovers.

Grizzlies guard Tony Allen started the first 36 games he played this season, then only five more the rest of the season. He said he was told Wednesday morning he would start again. "And they told me not to tell y'all," Allen said.

"Why would we tell them?" Gasol said when asked what lessons Portland could take from the Grizzlies, who overcame a 2-0 deficit against the Clippers in 2013.

Portland guard Arron Afflalo missed his fifth straight game with his own strained right shoulder, and reserve forward Dorell Wright remains out of this series with a broken left hand. ... Udrih, who had 20 points in the opener, scored eight off the bench before spraining his right ankle. He went to the locker room and got his ankle wrapped. He returned late in the third quarter.