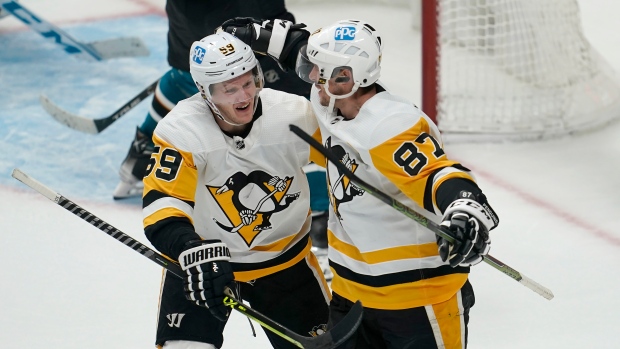 Guentzel and Kris Letang each had a goal and an assist as the Penguins won for the 12th time in 14 games. Sidney Crosby assisted Guentzel’s winner, his 19th goal.

Balcers connected off a no-look, cross-ice pass from Erik Karlsson. All-Star Timo Meier was also credited with an assist. It was Balcer's first goal since Nov. 6 and his third of the season.

The Penguins tied it midway through the second period on Letang’s breakaway. Letang sprinted for a loose puck outside the San Jose blue line and took it the rest of the way. He faked a forehand shot and then slipped a backhander past Hill for his third goal.

San Jose had a great opportunity late in the second period when Guentzel was called for a four-minute double-minor for high sticking, but the Sharks were unable to capitalize.

The Sharks had two more power plays late in the third and failed to capitalize. They were 0 for 4.

The Sharks power play ranked 24th in the NHL going into Saturday, scoring on 17% of its chances.