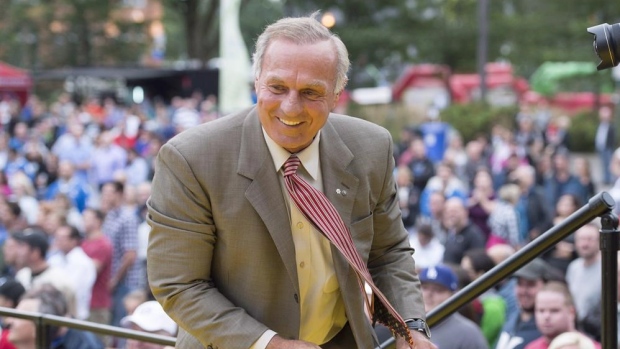 Hockey Canada announced Wednesday that Guy Lafleur, Lanny McDonald and Kim St-Pierre have been named to the Order of Hockey in Canada as Distinguished Honourees for 2022.

The trio will be recognized for their outstanding contributions to the sport at the annual Hockey Canada Foundation Gala & Golf in Niagara Falls in June.

"To be named to the Order of Hockey in Canada is one of the most prestigious accomplishments in our sport and all three Distinguished Honourees in the Class of 2022 are incredibly deserving of this honour,” said Tom Renney, chief executive officer of Hockey Canada. “Guy, Lanny and Kim have each contributed immensely to the growth of hockey across our country and internationally and we are thrilled that they will be celebrated in Niagara Falls this June.

“On behalf of Hockey Canada, our board and the Order of Hockey in Canada selection committee, I would like to congratulate Guy, Lanny and Kim on this tremendous achievement.”

The Order is a Hockey Canada initiative to celebrate individuals for their outstanding contributions or service to the growth and development of the sport of hockey in Canada. A total of 36 men and women have now been named to the Order of Hockey in Canada since it was first introduced in 2012.

Lafleur had a storied 17-year career with the Montreal Canadiens, New York Rangers and Quebec Nordiques. A 1988 inductee into the Hockey Hall of Fame, he was named to the NHL First All-Star Team six times and is the all-time leading scorer in Montreal Canadiens history with 1,276 points. He is a five-time Stanley Cup champion, and won the Art Ross Trophy three times, the Lester B. Pearson Award three times, the Hart Memorial Trophy twice and the Conn Smythe Trophy in 1977.

A four-time NHL all-star, McDonald co-captained the Calgary Flames to the franchise’s first Stanley Cup in 1989. Over a 16-year NHL career with the Flames, Toronto Maple Leafs and Colorado Rockies, McDonald won the Bill Masterson Memorial Trophy, the King Clancy Memorial Trophy and recorded 1,006 points in 1,111 games. His No. 9 was retired by the Flames in 1990 and he was inducted into the Hockey Hall of Fame in 1992.

He wore the Maple Leaf twice, including at the 1976 Canada Cup, where he earned an assist on Darryl Sittler’s double-overtime winner that gave Team Canada the championship. As an executive, McDonald has represented Team Canada as general manager and director of player personnel, winning a gold medal as director of player personnel at the 2004 IIHF World Championship.

She was named CWHL Goaltender of the Year three times and was twice named to the CWHL First All-Star Team. St-Pierre attended McGill University, where she was a three-time All-Canadian, was recognized as the top Canadian university women’s athlete of the year and became the first woman to win a Canadian men’s university hockey game in 2003.