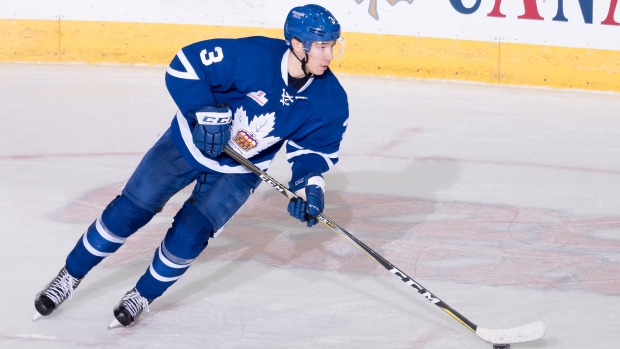 While many players are disappointed to be moved at the trade deadline, Rinat Valiev got his wish.

Valiev, who was traded along with Kerby Rychel and a second-round pick to the Montreal Canadiens for Tomas Plekanec and Kyle Baun on Sunday, admitted he wanted to be moved by the Toronto Maple Leafs.

"I was not surprised to be exchanged because that's what I wanted," Valiev told LNH.com, as translated by Google. "Now, I get a new chance here. I want to help the team win and, who knows, get an opportunity to show what I can do in Montreal."

The 22-year-old defenceman appeared in 10 games with the Maple Leafs during the 2015-16 season, but spent the past two seasons with the Toronto Marlies. He was fighting for a call-up to the Leafs with defencemen Andreas Borgman, Travis Dermott, Calle Rosen, Justin Holl and Timothy Liljegren with the Marlies.

He had five goals and 15 points in 40 games with the Marlies this season. TSN Hockey Insider Bob McKenzie said Sunday Valiev is believed to be very close to being NHL-ready, if he's not already.

The second-round pick is a solid rental return but the key piece may be 22-year-old Rinat Valiev, who is knocking on the door to be an NHL regular on defence. A likely third-pairing, reliable two-way defenceman, Valiev was jammed up in TOR with Dermott, Carrick, Borgman, Polak...

A native of Nizhnekamsk, Russia, Valiev was selected by the Maple Leafs in the third-round of the 2014 NHL Draft.