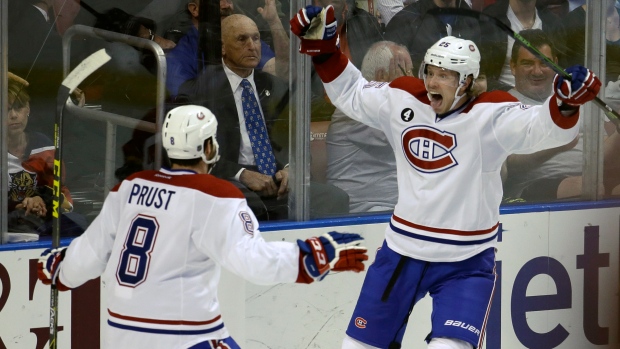 "I just wanted to make sure he's excited," Therrien said Wednesday before the Canadiens faced the Ottawa Senators in the opening game of their first-round series. "For sure, he's a bit nervous, like all the guys playing the first NHL playoff game of their career.

"We have some guys who will take their first step. For some guys from the Sens, it's going to be the same."

Players like de la Rose and defenceman Greg Pateryn were entering their first NHL post-season for Montreal, while Ottawa youngsters like Mark Stone, Mike Hoffman, Curtis Lazar and Cody Ceci were in the same boat.

The Bell Centre can be a particularly loud and intimidating place for players on both teams but it's also an experience they're unlikely to forget.

"I'm really excited for it," said de la Rose. "I'm still going to play the same type of hockey as I did in the regular season. I'm not going to change anything."

A forward from Swedish cub Leksands, de la Rose made a seamless jump to the NHL after playing only 37 AHL games for Hamilton. He impressed the coaching staff with intelligent defensive play that seemed beyond his years, although his six points in 33 NHL games showed his offensive side is still in development.

Now his game will be tested under playoff speed and intensity.

"His parents are going to be there this weekend, so it's going to be pretty emotional for him," said Therrien. "For a young kid like that, the only advice I told him was that he's played big games in the past and it's not going to be any different.

"The pace may be a little quicker, but one thing he's got on his side is speed so he'll be all right. He's got to enjoy the challenge. I gave him my support because we like the player — the way he thinks the game, his speed."

Defenceman Jeff Petry, acquired ahead of the NHL trade deadline in March, had yet to play in the post-season despite five seasons in Edmonton.

Other late pickups, like Brian Flynn and Torrey Mitchell, were to see their first playoff action as Canadiens, although Mitchell knows all about the Bell Centre ambience as he attended games here while growing up in nearby Greenfield Park, Que.

Nathan Beaulieu said his first taste of NHL playoff hockey, when he got into seven games last spring when Montreal reached the Eastern Conference final, made him a better defenceman. The 2011 first-round pick started the season in Hamilton but looks now to have established himself as an NHL player.

"I'm more excited this time around," said Beaulieu. "This is where you want to be. You want to be a playoff player."

The Canadiens called up veteran Joey MacDonald from Hamilton to be a practice goalie. MacDonald went 10-9-6 with a 2.77 goals against average in the AHL this season.