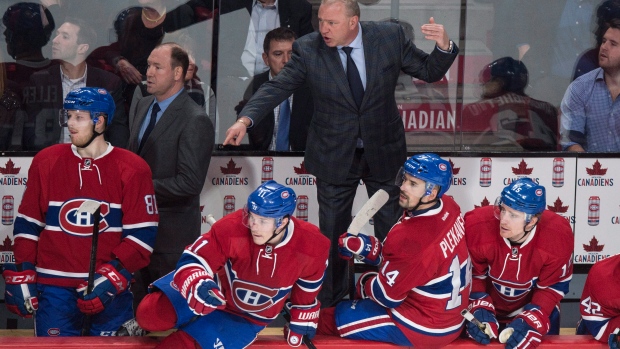 According to TSN Hockey Insider Darren Dreger, the Montreal Canadiens are set to give a vote of confidence to embattled head coach Michel Therrien.

Dreger says the news could come this weekend or possibly early next week.

"There are a number of reasons why Bergevin continues to support Therrien, but most of it surfaces and swirls around the injury bug that plagued the Montreal Canadiens through much of this season," Dreger explained on Insider Trading. "It obviously starts with star goaltender Carey Price, you add Brendan Gallagher into the mix and some others along the way, so I'm told Bergevin wants to give Therrien another chance to work with a healthy club."

Therrien's future behind Montreal's bench has been called into question at various points through this season. The Canadiens endured the loss of Price in late November and saw their 9-0 start to the season dissolve into several long losing streaks. The team eventually missed the playoffs.

Speculation of a possible Therrien firing heated up in January. The Habs had lost five in a row and 17 of 22 overall when on Jan. 21, Bergevin put an end to talk of a Therrien dismissal by giving his head coach a vote of confidence and saying his job was safe for the rest of the season - to the surprise of many observers.

“It’s been a hard time for all of us, but I believe in Michel Therrien and his coaching staff,” Bergevin told reporters at the time. “Nobody is going anywhere. Michel knows he has to make the players better and he works at it every day. That’s what I love about Michel Therrien.”

Bergevin signed Therrien to a four-year contract extension less than two years ago.

There was more speculation that time might have run out on Therrien after something of a falling out between the coach and star defenceman P.K. Subban after a loss to Colorado on Feb. 17 when the blueliner fell while trying to get to a puck late in the third period of a tie game. The turnover allowed the Avalanche to rush back for the winning goal in a 3-2 decision.

"It's too bad that an individual mistake cost the game, late in the game," Therrien said that night. "As a coach, I thought he could've had a better decision at the blue line. He moved the puck behind and he put himself in a tough position.

Subban explained that he simply lost an edge. But in the midst of another three-game losing streak, the disagreement led to more speculation that Therrien's days might be numbered.