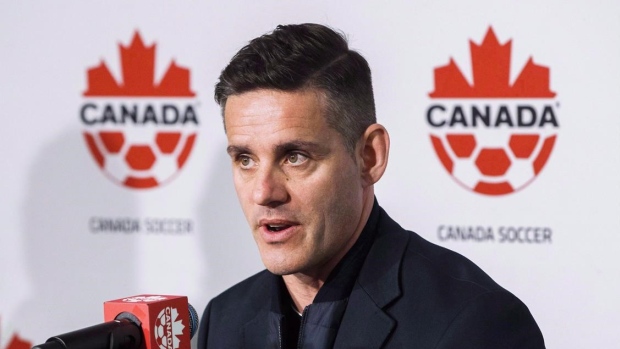 Haiti may be a surprise contender for this year's Gold Cup, but the coach of Canada's men's soccer team says the squad shouldn't be underestimated.

The unbeaten Haitians (3-0) have proven they have a lethal transition attack and that could spell trouble for Canada (2-1) when the two teams face off in the quarterfinals of the regional championship on Saturday in Houston, John Herdman said.

Haiti's athleticism and speed could pose problems, he added.

"For Canada, it's definitely a red flag," Herdman said. "We may possess quite a lot in this game but in those moments we lose the ball, we'll have to be on guard."

Haiti, ranked 101st in the FIFA rankings, posted a surprising 2-1 victory over Costa Rica on Monday to win a Gold Cup group for the first time ever.

The 78th-ranked Canadians dominated group-stage matchups against Martinique and Cuba, and dropped a 3-1 decision to Mexico, the top-ranked team in CONCACAF.

Canadians Derek Cornelius and Jonathan David were named to a list of the top-11 players of the tournament's group stage on Thursday.

Cornelius, a 21-year-old centre back for the Vancouver Whitecaps, is learning elements of the international game and is ahead of other players his age, the coach said.

"He's growing well through the tournament, he's reading situations better and he's becoming more fluid in our structure, in our attacks," Herdman said of the Ajax, Ont., native.

Ottawa's David, who plays for KAA Gent in Belgium, has been an offensive force, putting up three goals against Cuba in a 7-0 win, two against Martinique in a 4-0 triumph and an assist against Mexico.

"That's what forwards are there to do. I think this Gold Cup for him has been a genuine opportunity to show that he's a goal scorer," Herdman said of the 19-year-old striker.

Saturday's quarterfinals contest could have some added meaning for David, whose family hails from Haiti and who lived in the Caribbean nation as a small child.

There may be some extra emotion for the teen when the pre-game anthems play, Herdman said, but the coaches have no concerns about David being distracted.

"I'm sure when game-day comes, Jonathan will be absolutely focused on enjoying the game, but more importantly, getting goals. He's just laser focused in that space," he said.

Everyone in the locker room knows what they need to do to succeed on Saturday and what the stakes are, Herdman said.

"I think coming into this game, it's just very clear," he said. "It's must win. It's must win to move to the semi final."

At the last Gold Cup in 2017, Canada was ousted in the quarterfinals with a 2-1 loss to Jamaica.

That result hangs heavy over the group, Herdman said.

"These are the moments our team has been questioned," said Herdman, who took over Canada's men's team last year after a seven-year run with the Canadian women's squad.

"(The team has) got a goal, they're very clear on that goal. And I'm pretty confident that they'll give their best without any distractions to get the result for Canada."

Mexico faces Costa Rica, Jamaica meets Panama and the United States battles Curacao in the other quarterfinals at the Gold Cup, which has been held every two years since 2003.

Canada hasn't advanced to the semis since 2007.

Canada is 7-2-1 all-time against Haiti, with the only loss coming in their first game in 1973.