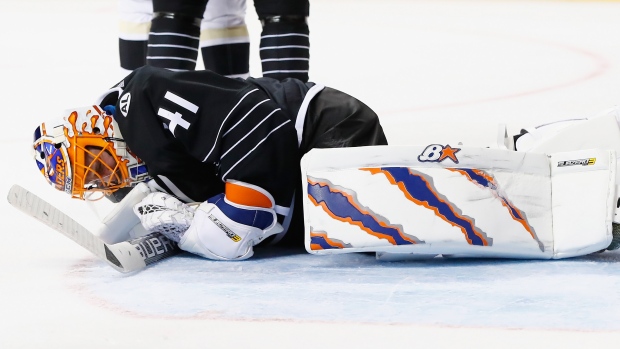 NEW YORK, N.Y. - Coming off a big win against a heated rival that capped off a sensational road trip, the New York Islanders avoided any sense of a letdown in their first home game in nearly three weeks.

Anders Lee scored the tiebreaking goal in the third period, Jaroslav Halak stopped 31 shots before leaving late in the third period with a possible groin injury and got his 200th career victory and the surging Islanders beat the Pittsburgh Penguins 2-1 Tuesday night.

John Tavares scored in the first period for the Islanders, and New York improved to 11-2-1 in its last 14 games. This was the Islanders first game at Barclays Center since Feb. 18 — they were coming off a 6-1-0 road trip that ended with a 6-4 win against the crosstown-rival Rangers on Sunday.

"This was a big game, this was a team we have a big rivalry with," Tavares said of the Penguins. "We can't take these guys for granted at all, especially with the players they've got and the success they've had in the past. We knew it was an important game and there was a lot of energy in the building."

Halak left the game with 4:22 remaining. Thomas Greiss replaced him and stopped all three shots he faced. Halak, in his second season with the Islanders, improved to 200-115-37 in his career.

"We don't have an update. Hopefully we'll know a little bit more tonight where he stands," Capuano said.

If Halak does miss time, the Islanders will go with Greiss, who is 18-6-3 with a 2.20 goals-against average, and No. 3 goalie Jean-Francois Berube.

"I got confidence if he does miss some time," Capuano said. "We got some quality goalies here so if we run into a situation, hopefully it's not too long a period that he's out, but we got confidence in the guys that we have here."

Kris Letang had the Penguins' goal and Marc-Andre Fleury finished with 25 saves. Pittsburgh, holding the first wild-card spot in the Eastern Conference, had won four of its last six but fell five points behind the Islanders for third place in the Metropolitan Division.

New York was 2 for 4 on the power play and shut down Pittsburgh on its three chances.

"It's discouraging," Penguins coach Mike Sullivan said. "I thought we played a lot of good hockey. I thought we controlled territory for most of the night. The difference in the game is the special teams."

Just 20 seconds after the Penguins' Matt Cullen was sent off for cross-checking, the Islanders got their second power-play goal of the game. Frans Nielsen sent the puck to Nick Leddy, and the defenceman fired a shot through traffic that Lee tipped from in front for his 12th of the season at 8:55 of the third.

The Islanders won their fourth straight overall, improved to 5-0-1 in their last six at home and remained three points behind the Rangers for second place in the Metropolitan.

Pittsburgh had a power play in the second when Leddy was whistled for cross-checking Patric Hornqvist, but Halak stopped all three shots during the Penguins' advantage — including slap shots by Letang and Phil Kessel.

Tavares got the Islanders on the scoreboard first with his 24th of the season. Just 9 seconds after Hornqvist was sent off for hooking Nikolay Kulemin, Tavares took a pass from Leddy and fired a shot from the top of the right faceoff circle past Fleury 8:04 into the game. It was Tavares' 198th career goal and first after a five-game drought.

With the teams skating 4-on-4 after roughing penalties on Pittsburgh's Evgeni Malkin and New York's Travis Hamonic, Letang took a pass from Sidney Crosby near the blue line, skated through the right faceoff circle and fired the puck into the top right corner of the goal with 6:47 to go for his 12th of the season. Crosby got his 38th assist and 66th point, both team highs.

NOTES: Tavares has nine goals and 21 points in his last 16 games. ... The Islanders were without Calvin de Haan for the second straight game due to a lower-body injury. ... New York F Brock Nelson played in his 199th consecutive game and F Anders Lee his 140th straight. ... Shane Prince, acquired from Ottawa at the trading deadline, and rookie Ryan Pulock made their home debuts for the Islanders. ... The Penguins won the teams' first meeting, 5-2 at home on Jan. 2. The teams have two more games remaining, March 15 at Pittsburgh and April 2 back here. ... Crosby has three goals and seven assists in his last six games. ... The Penguins were playing the second of nine straight against division foes, after opening the stretch with a 6-1 win at New Jersey on Sunday.