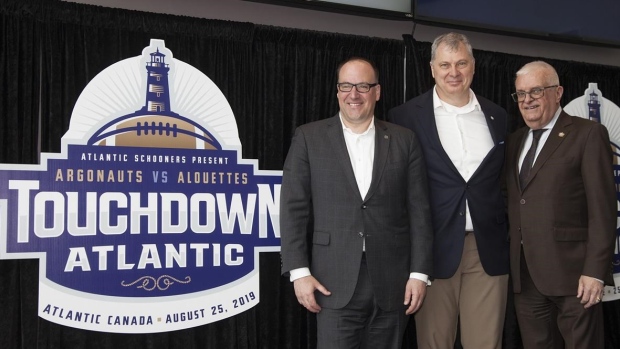 HALIFAX — A partner in the business group trying to land a CFL franchise and stadium in Halifax says the group's long-awaited business plan is now in the hands of the municipality.

In an earlier interview, LeBlanc said the submission to the municipality's chief administrative officer, Jacques Dube, includes a 40-page main proposal along with accompanying documents that amount to hundreds of pages.

"We will work very closely with Mr. Dube and his staff over the next series of weeks and months as they review," LeBlanc said.

He said it was a relief to finally submit a package that was first promised last December.

"I know we are taking our lumps from people saying, 'Why has it taken longer?' Well, it's taken longer because we want to ensure that when we submit, it's everything that we can envision that HRM senior staff is going to require," he said.

He said the schedules accompanying the main proposal are the work of third-party experts recruited by the business group and Canada Lands Company, which controls the land where the business group has said it would like to build a $130-million stadium.

They include a real estate market and stadium impact analysis, planning assumptions and site plan revisions, along with a list of prospective community events for the stadium.

There are also letters of support from outside organizations, a revised master plan from Canada Lands, infrastructure designs, a traffic impact study, and a survey of stadium financing plans in the U.S. and Canada from a public-private partnership perspective.

LeBlanc said a previous economic impact analysis that was commissioned from Deloitte in May 2018 was also included.

He said it would be left up to the municipality to release any details in the documents.

Meanwhile, LeBlanc confirmed the business group is formally trying to get approval for a stadium in Shannon Park, which sits on land on the Dartmouth side of Halifax Harbour near the MacKay Bridge.

"I know that there will be some questions that come up and there will be evolution over the next months and even years as we move forward," LeBlanc said.

He said he wants people in Halifax to know Schooners Sports and Entertainment is serious in its intent.

"Obviously there are going to be people who are against it, and all we ask is that they look at the information with an open mind."

Halifax Mayor Mike Savage said in an interview last week that a final decision by regional council is not imminent.

Savage said once submitted, the business plan would be studied by city planning staff before it would go to council for consideration.