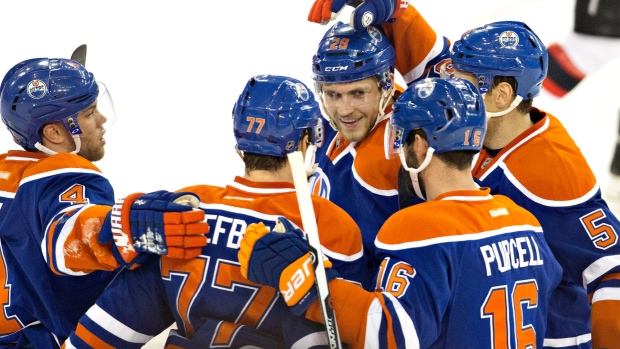 Draisaitl and Taylor Hall each recorded a goal and two assists as the Edmonton Oilers snapped a three-game losing skid with a 5-1 victory over the New Jersey Devils on Friday.

"Every time (Draisaitl) has the puck, he's poised, he's patient, he's making plays, it's good to see," said Oilers forward Jordan Eberle. "He had kind of a tough time last year and to come back and to rebound and to play as well as he is right now, it's awesome. Especially with McDavid being out, he's filled in really well."

A second-year German-born forward, Draisaitl has now recorded 17 points in the 10 games he has played for the Oilers since being called up from the American Hockey League, moving him into second in team scoring. Last season, the third-overall pick in the 2014 NHL Entry Draft played in 37 games for Edmonton and recorded just nine points before being sent back down to junior.

Draisaitl is enjoying his current run of success.

"It's nice, it's a lot of fun," he said. "It's the best league in the world. I play with some great players and they make it easier for you."

Oscar Klefbom, Eberle and Mark Letestu also scored for the Oilers (7-12-1), who won for just the second time in seven outings.

Kyle Palmieri had the lone goal for the Devils (10-8-1), who lost their second game in a row.

"We didn't play to our capabilities and the result was what it was. We didn't really play well enough in any facet of the game to find a way to win," said Devils head coach John Hynes. "You have to give credit to Edmonton. They got off to a good start and played solid when they had the lead. On the flip side, we didn't have one of our better efforts."

Edmonton started the scoring seven minutes into the opening period when Hall made a terrific feed in front and Draisaitl was able to deflect the puck at full speed past Devils goalie Keith Kinkaid for his seventh goal of the season.

The Devils tied the game on the power play six minutes into the second period as Palmieri was able to walk in and pick the top corner on Oilers starter Anders Nilsson.

Edmonton got that goal back a minute later as Teddy Purcell spotted Klefbom creeping in from the point and the Oilers defenceman was able to send the feed into a wide-open net.

The Oilers made it 3-1 early in the third on the power play as Eberle was allowed to take several whacks at the puck from the side of the net before banking it in off the skate of Devils forward Lee Stempniak.

Edmonton added to its lead with seven minutes left as Letestu picked off a pass and sent a shot that went off Kinkaid's glove and in.

The Devils pulled their goalie with more than three minutes remaining and it led to an empty-net goal by Hall with an assist to Draisaitl.

Notes: The Devils return to the ice on Sunday, finishing off a three-game Western Canadian road swing in Vancouver. The Oilers kick off a five-game trip in Washington on Monday… Out of the lineup for the Oilers were Connor McDavid (collarbone), Justin Schultz (back), Rob Klinkhammer (leg), Luke Gazdic (illness) and Andrej Sekera (illness)… Missing with injuries for New Jersey were Tuomo Ruutu (foot) and Patrik Elias (knee)… Backup goalie Kinkaid made his fourth start of the season in place of Cory Schneider.