Noodles: Hall signing is about fit and not money

Do not be alarmed by the loud noises emanating from Western New York right now. It’s just the Buffalo Sabres fan base, as embattled as any as you can find in the National Hockey League, celebrating the UFA signing of the off-season.

I think it is fair to say that we did not expect a forward the calibre of Taylor Hall to sign in Buffalo this fall. The Sabres’ rebuild is seemingly perpetual at this point, and the 28-year-old winger has certainly signalled that he would like to play for a contender, having spent an inordinate amount of his career on truly bad hockey teams.

But Hall also entered unrestricted free agency at a terrible time, in the midst of significant economic distress for the league and a number of cash-poor and capped-out teams disinterested in taking on big money.

The one-year, $8-million contract may have been unpredictable, but that doesn’t make it a poor marriage. Hall can use the short-term deal to test the waters out with a Buffalo team that just so happens to have one of the best centres in hockey in Jack Eichel.

The Sabres, of course, are under immense pressure to start winning. Eichel has been clear about his frustration with the direction of the franchise, to say nothing of the team’s nine-season playoff drought – the longest in the league by a considerable margin.

Even if the Sabres can’t convince Hall to extend, it’s a no-brainer signing – Hall will almost surely produce and will likely be one of the most coveted assets at next year’s trade deadline if need be.

No one will be more pleased about Hall’s signing than Eichel, though. In five seasons, Eichel has either scored or assisted on 34 per cent of Sabres goals – a stunning number that attests to Eichel’s skill and the lack of talent that has surrounded him in Buffalo.

Eichel has done this with little support over the years – the acquisition of Jeff Skinner aside, the Sabres have struggled to both find wingers for Eichel and to build capable lines beyond the top group.

Consider, for a moment, where Hall would grade relative to Eichel’s common linemates over the years – I have added fellow new additions Eric Staal (Minnesota) and Cody Eakin (Winnipeg) for frame of reference: 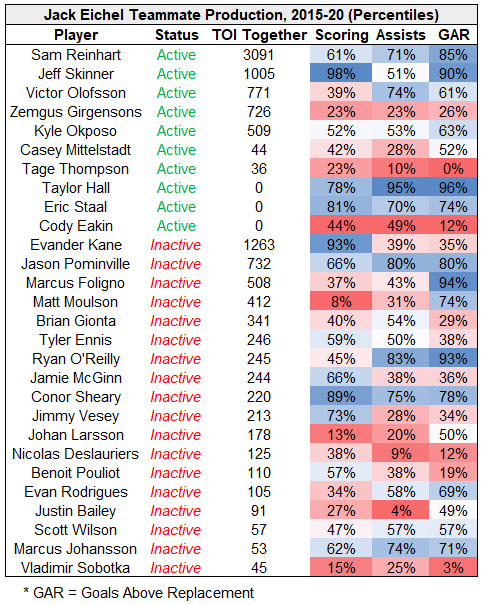 Hall is comfortably the best player Eichel has played with at this point in his career. Skinner remains a fantastic shooting option, but he’s never been a high-end individual playmaker. Reinhart has also been productive, but he is less of an offensive contributor and tends to be more reliant on Eichel’s creativity than vice versa.

As for the rest of the group? If the percentiles don’t speak for themselves, that stunning number of ‘inactive players’ — those who have left the Sabres organization by choice or by force — over just a handful of seasons will make a similar case. The team just has never been able to find the right supporting cast mix for their franchise player. Buffalo has been synonymous with poor play and heavy roster turnover for some time now, so the second half of the table should not be surprising.

Earlier, I posited this marriage works for both sides. If there is one player sympathetic to Eichel’s plight, it’s surely Hall. The past three years have seen Hall playing predominantly with Nico Hischier, Kyle Palmieri, Jesper Bratt, Christian Dvorak and Conor Garland – not exactly a murder’s row of first-line talent in his stops with New Jersey and Arizona.

Even going back to his Edmonton days, Hall has never had a passer with the abilities of Eichel – the type of passer who can make use of Hall’s blistering speed down the wing in transition opportunities, something that’s been sorely lacking in Buffalo over the years.

Grabbing Hall is a big win for a Buffalo organization that desperately needed one, and from a pure risk mitigation standpoint, there is nothing to hate about this signing. And, if they do end up making magic together next season? Perhaps Hall can carve out a longer-term future in Buffalo.

It’s not like they won’t have the cap space to make it happen.