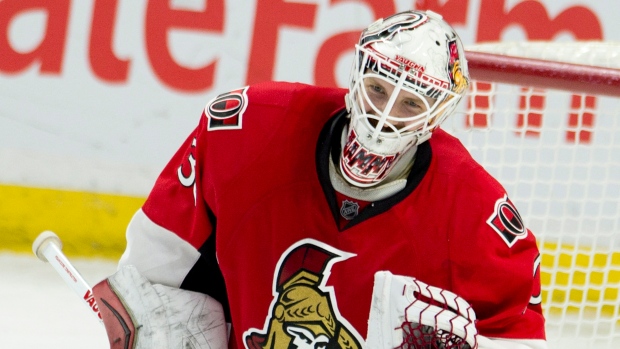 OTTAWA - Prior to his first NHL start, Andrew Hammond said his parents were too nervous to come to the game. Hammond looked anything but between the posts.

Hammond made 42 saves in that first start and led the Ottawa Senators to a 4-2 win over the Montreal Canadiens on Wednesday night.

"They're in Phoenix right now so the flights were a little difficult, so it's a little bit of both (why they weren't at the game) but I know they were watching intently," Hammond said, adding he didn't feel the nerves his parents did.

"To be honest there were a little bit of nerves but nothing unusual and when the puck dropped I felt really comfortable and every shot that came my way I seemed to settle in a little more."

Dustin Tokarski made 35 saves for the Canadiens (37-16-4), who got goals from Max Pacioretty and Nathan Beaulieu.

Hammond was called into action Monday to replace starter Robin Lehner, who was hurt toward the end of the second period against Carolina. Lehner was unable to play Wednesday and with Craig Anderson already out with a hand injury, Hammond got the start.

"He made some really key saves, especially on a Pacioretty breakaway, and overall I think he was really solid," Senators captain Erik Karlsson said. "He played the pucks and helped out in the defensive zone and I don't think we could have asked for anything more from him."

The Senators opened the third period with a 2-1 lead before Stone gave them some insurance with a power-play goal at 9:27.

Karlsson's shot hit the post and then Tokarski's pads before coming to a rest six inches from the goal-line. Stone was first to the puck and was awarded the goal after video review confirmed it wasn't kicked in.

That goal wound up being rather important as Beaulieu scored at 14:25, cutting the Ottawa lead to 3-2.

"We played a game that we can't play," Canadiens coach Michel Therrien said. "It was good to get 44 shots but we gave up too much to our opponents."

There was no scoring in the first period but there were several opportunities as the teams combined for 27 shots and three goal posts — including one by Canadiens forward Brandon Prust, who struck iron despite being alone at the top edge of the crease in front of a wide open net.

"The first period alone we had 11 chances against and that's way too many," Pacioretty said. "It's not our style of play and it's not the way we've had success."

The furious pace continued into the second period but it was Montreal that had most of the early momentum, with 11 shots in the opening seven minutes.

The Senators drew first blood, though, as Michalek won a goal-mouth battle and jammed a puck past Tokarski at 11:26.

It didn't take the Canadiens long to respond as Pacioretty scored on a breakaway by beating Hammomd with a wrist shot through the legs. Hammond stopped all 26 shots he had faced up to that point.

The Senators took the lead once again at 18:13 when Pageau scored from the top of the crease when he tipped in a slap pass from Karlsson, who finished with two assists for the fourth straight game.

Notes: Clarke MacArthur, Patrick Wiercioch and Robin Lehner were scratches for the Senators, while Manny Malholtra, Mike Weaver and Sergei Gonchar did not dress for the Canadiens… Michel Therrien coached his 649th game Wednesday, moving him ahead of John Muckler for 46th on the all-time NHL list.