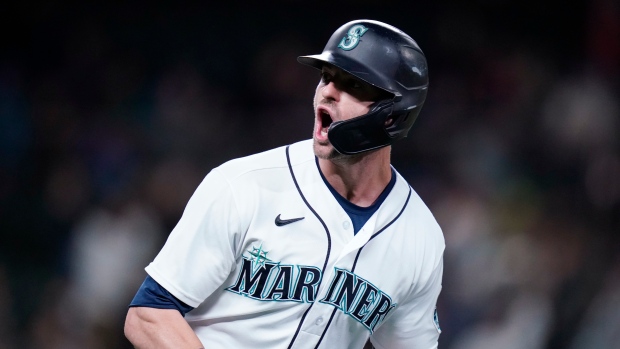 Seattle’s 10th straight victory against Oakland tied the team record for most consecutive wins against a single opponent. The Mariners have won eight of nine overall and nine of their last 11.

They are 1 1/2 games behind Boston for the second wild card, with Toronto a game back of the Red Sox. Both those teams were off Monday.

Oakland fell 3 1/2 games behind Boston and two back of the Mariners with two more games to play in Seattle.

Haniger hit his first three-run homer to the bullpen in left field during a five-run fourth inning, then put the game away with his second shot to nearly the same spot in the sixth. He has 37 homers this season after sitting out for 18 months following two surgeries.

Ty France reached base five times, going 4 for 4 with a walk and four RBIs. J.P. Crawford added three hits and an RBI. Each scored three runs.

The Mariners picked up their 21st win with Chris Flexen (14-6) starting on the mound. The right-hander struck out six, giving up four earned runs and seven hits in five innings.

Seattle reliever Casey Sadler extended his major league-leading scoreless streak to 25 appearances and 23 2/3 innings with three groundouts in the sixth.

Seth Brown gave Oakland starter Cole Irvin (10-15) a 3-0 lead with a three-run homer in the first — part of four consecutive hits by the A’s. But he left after walking the first two batters he faced in the fourth, and reliever Deolis Guerra gave up run-scoring singles to Crawford and France to set up Haniger’s first homer.

The Mariners can set the team record for consecutive wins against one opponent when they play Oakland on Tuesday. Their previous 10-game winning streaks over a single foe came against Kansas City in 1985 and Baltimore in 2001.

Seattle sent former starter Justus Sheffield to Triple-A Tacoma and recalled RHP Wyatt Mills. Sheffield was moved to the bullpen after returning this month from a stint on the injured list due to a strained left forearm. Manager Scott Servais said the Mariners needed pitchers they could rely on down the stretch with a wild-card spot on the line, and Sheffield has struggled since returning. He gave up a hit and walked five while allowing three runs in an inning in his last appearance, a 14-1 loss to the Angels on Saturday.

Athletics: OF Starling Marte (strained left lat) and 2B Josh Harrison (strained quad) are both day-to-day after aggravating injuries Sunday. Oakland manager Bob Melvin said Marte strained the muscle Saturday during an at-bat, and though he was able to play Sunday, the injury worsened. Harrison was pulled from Sunday’s game after making a dive for a grounder that aggravated an old injury. Oakland called up OF Luis Barrera for a healthy hitter on the bench and designated RHP Michael Feliz for assignment.

Athletics: RHP Chris Bassitt (12-4, 3.16 ERA) makes his second straight start against the Mariners since returning from the injured list following surgery to repair a facial fracture. He gave up a hit in three innings in a no-decision against Seattle last Thursday.

Mariners: Servais said the decision on who will start Tuesday against the A’s would come after Monday’s game. LHP Yusei Kikuchi (7-9. 4.41) was scheduled, but he's been struggling the last month and could be replaced.